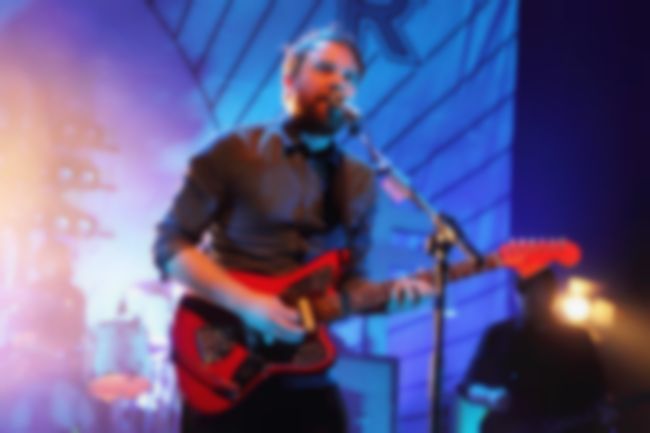 Despite front man Scott Hutchinson welcoming the audience (an audience that – uncharacteristically for the usually-sedate Cambridge – he would later go on to approvingly call both “very chatty” and “the weirdest audience I’ve ever played to”) to “Frightened Rabbit’s Valentine’s Extravaganza”, the band would not, perhaps, be the first choice for a date night on what is meant to be the year’s most “romantic” day.

With a line-up boasting both The Rabbits and the highly-regarded Wintersleep as main support, though, it is an irresistible bill. Wintersleep’s set is a solid introduction, their gentle air of sadness, occasional torment and heartfelt emotion building in impact, seriously finding its stride by the time they reach the impassioned closer ‘Oblivion’.

Instantly, though, as Frightened Rabbit take to the stage and launch into ‘Holy’, all definitions of “impassioned” need instant revision. Time and time again throughout their set – a nice balance of material from their illustrious back catalogue and terrific new album Pedestrian Verse – the combination of Hutchinson’s delivery and the intensity of the live setting manage to wring even more emotion and passion from tracks that have made the band already, on record, amongst the most emotionally affecting in recent years.

With appreciative roars of recognition greeting songs like ‘The Modern Leper’ and ‘Backwards Walk’, the enthusiastic audience responds with an arms-in-the-air euphoria to the “answer / cancer” couplet of ‘Nothing Like You’ in a way that, on paper, might seem incongruous but in the context is unavoidable. ‘Old Old Fashioned’ actually transforms into the hoedown it clearly always wanted to be.

The emotional core of the set comes with the sequence of ‘Backwards Walk’, ‘State Hospital’ and the grave, acoustic ‘Poke’, whose devastating payoff “…but I hate when I feel like this, and I never hated you” renders the boisterous crowd silent at a stroke. These three tracks, combined with pre-encore set closer (and, arguably, the new album’s finest moment in a field of many) ‘Acts of Man’, does more than just consolidate the band’s reputation as evocative, articulate spinners of lyrically honest tales of love and loss.

As they returned for an encore of ‘The Woodpile’, ‘Living in Colour’ and – finally – ‘The Loneliness and the Scream’; (gently tapering off until all that remains at the end are Hutchinson’s vocals and the accompanying claps from the crowd) it becomes clear that the extra level of intensity provided by the live setting, rowdy drunk hecklers and all, is perhaps the perfect way to showcase these beautiful, moving, rough and tender songs of broken hearts, passion, despair and redemption. We think St. Valentine would probably have approved.