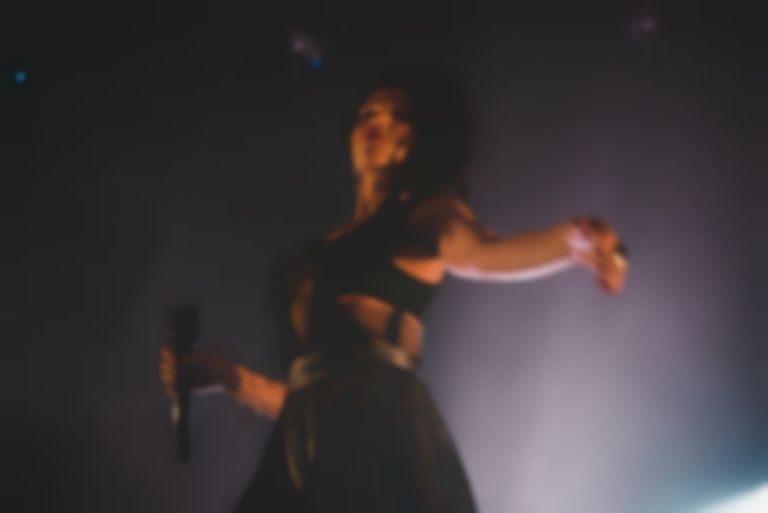 It's a barrage of throttling electric-blue smog, paparazzi lightning strobes and flickering bulbs that heralds the arrival of FKA Twigs to the stage at Bristol's Trinity Centre. As she strides, locked into a zone of intensity, roars of noise, like battlecries, erupt from the audience.

The neo-choir of “Preface” creeps into the hot mist in the old church. As remarkable as her composition is, with its almost-sacrosanct words, tripped-out beats and ambient terror, the show-stopper comes in the form of the spectacle unfolding. Bone-snap limb movements and Ring-girl slithers are punctuated by fluid grace and the bedrock of ballet garbed in Bellatrix-chic. Billowing smoke and an array of flashing lights, it's utterly flawless. Not in the sense that its polished to holy hell, but in that at the crossroads of all these elements, it's easy to realise that this is how shows should be. This is how music should be performed. All the elements fall into place: the sounds, the atmosphere, the visuals.

twigs careens through volatile emotions as she tears hearts asunder with “Water Me” and “Papi Pacify”. “Two Weeks” rocks your ribcage like a blast shockwave; “Lights On” is a spine-tingling ballad lit by crimson pulses. “Give Up” is a shimmering, glistening beacon. twigs employs high levels of pop/R&B staples in her avante-garde labyrinth. Rhythms are asymmetrical and off-kilter, but you'll swoon to the synths. Perhaps her vocals are jarring and crackling between octaves, but the soft wob of bass will lull you to safety. There's no discernible blemishes. You're locked in a moment that twigs has summoned.

Suddenly, house lights glare. twigs takes a moment to thank the crowd, shyly, before making a heartfelt statement. “I'm from the Gloucester and Cheltenham area, and Bristol used to be the closest big place to do all our Christmas shopping... I had my first ever date here,” she says through walls of cheering. “I live in London now, so when I went back there last night, I felt glad to be home. But now, looking at all your faces, I realise this is my home... this is the closest I've ever played to where I grew up.”

“Fuck Kristen Stewart” a voice suddenly yells from the crowd.

And it's then, just over halfway through, that twigs' sheen loses its lustre. Not a lot, not enough to derail an otherwise spectacular performance, a veritable masterclass in modern performance arts, a thoroughly invigorating, devastating set. Yet still, after the Trinity Centre drops dead silent in the aftermath of the remark, the briefest flash of a wry smirk shooting across Tahliah Barnett's underlit fizzog (not out of anything remotely close to smugness, it must be pointed out, more like the astonishment and disbelief that comes from watching that gung-ho chancer in maths answer back to the dragon of a teacher we all had), twigs becomes, well, human.

Sure, the emotional response she injects, the visceral kneejerk reactions to her music, that's all 101% mortal. However, the aura that she's cultivated over her career so far is slowly shattering, and that's evident tonight. Instead of rattling forth semi-oblivious to the crowd's presence, as she is at the outset of her performance, you become aware that she's not this superhero here to save us all from the tribulations of the daily grind. She's a musician, a very, very good one with a riveting live show, but merely (as merely as that can be) a musician nonetheless. Perhaps the Mercury-fallout, LP1-wake hype has a lot to do with building her up onto a golden pedestal way above the clouds. Maybe, just maybe, when an enigmatic aloofstress with her affinity for perfection and ability to pull it off comes along, we don't want to snap out of the illusion that's been crafted.

It's not necessarily a dire consequence, but it is worth noting. twigs is mutating(/maturing) from a rare, singular breed of performer into a pop typhoon on the brink of full-blown Top 40 warfare. The Daily Mail is taking aim (though it's unclear if they know her name outside of “Robert Pattinson's Girlfriend” yet), she's on the cusp of being crowned Mercury Prize winner, if the bookies' predictions are to be believed – which turned out pretty well for the likes of alt-J, Pulp, Arctic Monkeys, Franz Ferdinand and James Blake (thought admittedly less well for Gomez and Talvin Singh) – and, as evidenced tonight's lured masses, she's nurturing a healthy fandom.

Towards the end she tells a short story to mask some technical difficulties in the bass for “Video Girl”. It's similar to Philip Seymour Hoffman's anecdote in Doubt, about a woman who goes to confession feeling guilty about gossiping and must cut up a pillow. Once she's finished twigs is quick to slyly tack on, aware of her current status and canny with her tongue's consequences: “It's pretty pertinent about my life right now too.”