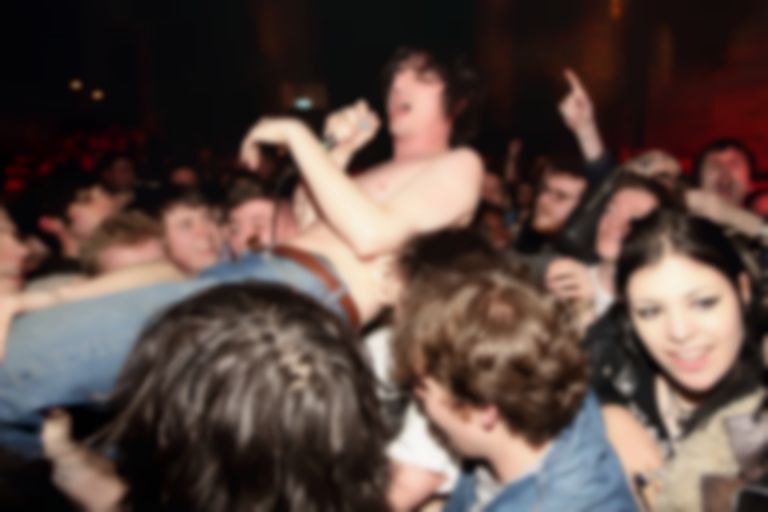 Most homecoming shows tell a lovely narrative of a band's rise from the smallest venues in the city to sold-out tours across the country, and there's the suggestion that no matter what opulence the future holds, their hometown will always be where the magic is retained.

This could certainly be held true for Fat White Family. Their formation in 2011 at Brixton pub, The Queens Head, is as widely associated with the band as their blistering live shows, off-stage antics and taboo-referencing songs. However, tonight (17 September) feels far more redemptive than most homecomings. Brixton is on the decline, being gentrified at an alarming pace with its "life and soul being shipped down the river", and Fat White Family look awfully angry about the whole situation.

In fact, the Fat Whites have been pissed off about it since they started five years ago. When journalists were describing their music as "squat-rock" due to certain band members, despite working, not being able to afford anywhere to live, it was pretty distasteful. When the press and easily-offended civilians were calling the band "lunatics" it wasn't hard to roll your eyes, given that GG Allin had pre-existed. Their alleged shock tactics were nothing more than a bunch of people getting drunk and taking drugs like so many 20 somethings in the country. Their insistence in voicing their own opinions and writing about whatever they wanted was somehow headline-inducing, even drawing snarls of contempt from over-40s saying they weren't a patch on Throbbing Gristle. Their decision to write lyrics about peadophilia was deemed lurid when quite openly the press had hushed up the Jimmy Saville sex scandal for decades upon decades. Their second-album, Songs For Our Mothers, which discussed Nazism, caused offence when fascism is welcomed by The Daily Mail, a paper read by millions and allowed to worry about the "tide of migrants" entering our borders. They offend the right people, but also seem to be a lone voice in a climate where people are disintegrating left, right and center. No wonder Fat White Family are fed up.

However, despite the conditions we see Fat White Family in tonight, it's still kind of incredibly heart-warming, seeing a band this conflicted on a stage as vast and spectacular as Brixton Academy, visibly enjoying themselves. Guitarist Saul Adamcezwski, who in recent gigs has taken to standing in the shadows, sunken eyed, is at the forefront (I guess there's nowhere to hide on a stage like that), and his toothless grin and genuine satisfaction at being there is uplifting. Perhaps it's down to the fact that this could be one of Saul's last shows with the 'Family that the whole fanfare seems bittersweet. He truly is a huge cog in the band, his sound imperative to their style. It will be interesting to see how the band progress after his departure despite the fact he's part of the FWF spin off-project The Moonlandingz.

In some ways, tonight is as luxurious as a FWF gig can get; there are backing singers and a saxophone, previous members are brought on stage to be thanked and there's a real love in the air, a feeling of elation. As per, Lias Saoudi is enthralling. Not just because you never know quite what he is going to do next, but more the fact that on stage it's like watching a life cycle unfold before your eyes, from reserved chrysalis to deranged butterfly. He enters in an ill-fitting suit with smoothed back hair, skulking around the stage, staring the audience out. Then, a quarter of the way through, the clothes are off, he's juddering and jittering like a man possessed and screaming down the microphone, exorcising every pent up frustration possible.

They open with "Tinfoil Deathstar", a surprising choice when they usually serve up the haunting unity of "Auto-Neutron" first at most gigs. A groovy, brain-burrowing ode to David Clapson, it is completely hair-raising live, with walls and walls of guitar skrees and spacey organs. Yet it still feels completely attainable, because no matter how feral people try to make out Fat White Family are, their music is ridiculously tight. Refusing to confine themselves to any one genre means they can really keep you entertained.

"Breaking Into Aldi" offers deprived scuzz, high-pitched vocals and something really hard to not dance to, fan favourite "Is It Raining In Your Mouth" has the audience chanting gleefully to the lyrics "five sweaty fingers on the dashboard", "Touch The Leather" is Fat White's at their sexy, sleazy best and the whirring, disco groove of "Whitest Boy On The Beach" is wonderfully matched by the classic singalong quality of "Satisfied". The most poignant song of the night, personally however, was "Goodbye Goebbels". A beautifully morbid ode discussing Hitler and Goebbels' last few moments in the bunker, watching Lias and Saul gravely sing the swansong based on their own personal partnership to a crowd rife on causing mayhem and leaving them all watching silently is somewhat stirring.

Fat White Family have inspired a new wave of people to give less of a shit and more of a shit in equal measure. Yes, punk rock and naked flailing on stage have been happening for fucking decades, but this PC generation where we've seen it all, heard it all and read about it all extensively on the internet leaves little room for us to actually get excited about anything anymore. So if we can go and sing along to songs written from the viewpoint of Harold Shipman, then God knows, we will. Fat White Family unite people in the sense that we can be losers and fuck ups and opinionists, but we can be proud of it and take the piss out of it and ultimately use it to have a good time. That includes the girl who spent the entire gig on people's shoulders, topless, with a swastika drawn under her tits.

Tonight's gig proved that Fat White Family are simply untouchable, a notion I've had in my head for a while, now. Every time I see a live band that isn't them it just doesn't feel quite as right; you know what's going to happen and you already know that there's no real message to convey. That's fine in some circumstances, but in 2016, Fat White Family are crucial proof that rock and roll can still be useful, if it really wants to.