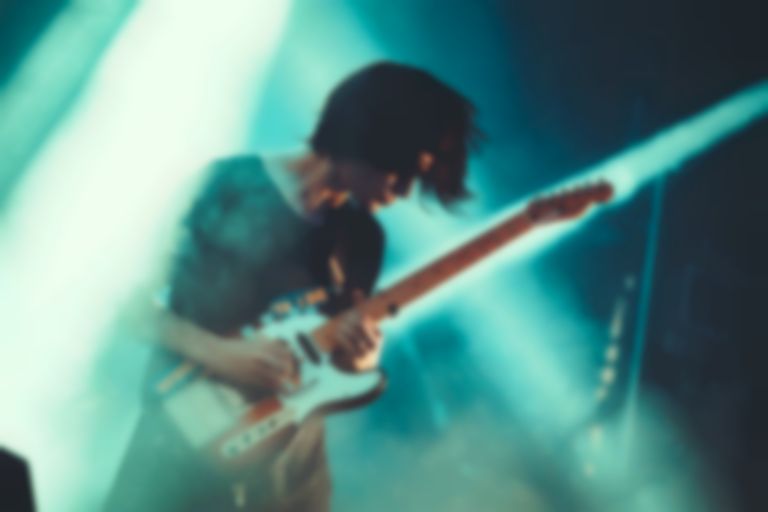 We know the unwritten laws for stadium-scale shows: grand gestures, familiar fan favourites, iconic singers tirelessly working the crowd, video screens to generate a sense of intimacy by projecting every on-stage grimace all the way to the back row. When the audience is counted in the tens of thousands, bands are expected to play it safe: no alarms and no surprises, please.

It’s hardly a surprise that Radiohead refuse to conform fully to these industry standards during their second huge UK outdoor show of the summer (although not by design; tonight’s event at 50,00 capacity Lancashire County Cricket Club replaces two nights at the Manchester Arena which had to be cancelled following May's tragic event at the venue). After all, this is the band that wrote the book on how to become and remain a top rank act despite a near-compulsive taste for defying expectations and challenging their audience. There are the usual video screens, but rather than the customary close-ups of fretboards and emoting faces, we’re treated to the disorientating Orwellian image of Thom Yorke’s gigantically blown-up eye watching the crowd during “You and Whose Army”. In place of on-stage banter between songs, we get Yorke’s borderline-incoherent internal monologue. Much of the evening is dedicated to material that exemplifies the very opposite of stadium bombast: the sheer audacity of expecting an enormous throng to stop guzzling beer and singing along in order to pay proper attention to songs as skeletal and subtle as “Pyramid Song” is impressive, and that gamble pays off. Ultimately, tonight’s performance is a triumph precisely because of Radiohead’s dogged refusal to treat it as a lowest common denominator stadium gig; there might be three times as many people here than were due to attend the arena show originally planned for tonight, but the performance is still as uncompromisingly focused on music as it would be in a smaller setting.

Radiohead's willingness to publicly embrace their past is much less expected. From the opening twosome “Let Down” and “Lucky” onwards, selections from recently reissued, gloomily gorgeous 1997 alt/art-rock landmark OK Computer crop up with surprising frequency, to the rapturous delight of the near-capacity crowd. Whereas the band have in the past dispatched "the hits" either reluctantly or not at all, the performances of fan favourites are thoroughly committed tonight. “Fake Plastic Trees” is delivered with a raw ache that suggests the 22-year old song was only written yesterday. The suddenly – yet again - topical lines ‘’bring down the government, they don’t speak for us’’ during a dejected and tender “No Surprises” result in a huge cheer. But tonight’s show is far from a cosy trek through the band’s back pages. All aspects of the band’s past and present (it’s a sign of Radiohead’s relevancy that there’s reason to be disappointed only three cuts from last year’s moodily beautiful A Moon Shaped Pool are aired) are represented. It’s hard to think of any other act who could keep a huge crowd on their side through such striking, abrupt changes in sound and presentation as when, say, the organically jangling hypnosis of “Weird Fishes/Arpeggi” gives way to the frantic electronica ranting of “Idioteque” but Radiohead manage this feat with natural ease, highlighting the band’s awe-inspiring versatility. To further keep the prospect of cosy nostalgia at bay, the OK Computer material sounds remarkably contemporary, both musically and with regards to the album’s prescient lyrical themes of alienation and stresses of an unreasonably accelerated modern life. It’s almost as if by refusing to do anything in a similar big-chorused prog/post-rock vein ever again, Radiohead have managed to protect their most renowned work from the ravages of age.

For a band with a reputation for projecting angst and gloominess, it’s notable just how much joy the band’s music generates tonight. The outdoor setting creates some predictable issues regarding sound quality. There are screams urging the band the turn the sound up, and understandably so; the volume is at times almost distractingly low. But being parked under the stereotypically gloomy Manchester skies also leads into something of a festival atmosphere. The sight of thousands of people happily bellowing along – word-perfect - to the repressed rage of "Paranoid Android" (the heavy skies thankfully disobeying the song’s command to ‘’rain down on me’’) must be one of 2017’s most brilliantly surreal musical moments.

Towards the very end, Radiohead even acknowledge one of the central conventions of large-scale shows: audience participation. “Please sing along to this one if you know the words, I’ll probably forget the first verse”, Thom Yorke states before a performance of the very rarely played “The Bends”. Unsurprisingly, the crowd happily comply. The communal singalong of the refrain ‘’for a minute there, I lost myself’’ from the set-concluding “Karma Police” continues well after the band have left the stage for the last time following the second encore. It's not easy to get immersed in the performance at huge outdoor events like this. On their current, towering form, Radiohead are capable of utterly captivating their devotees in any setting.