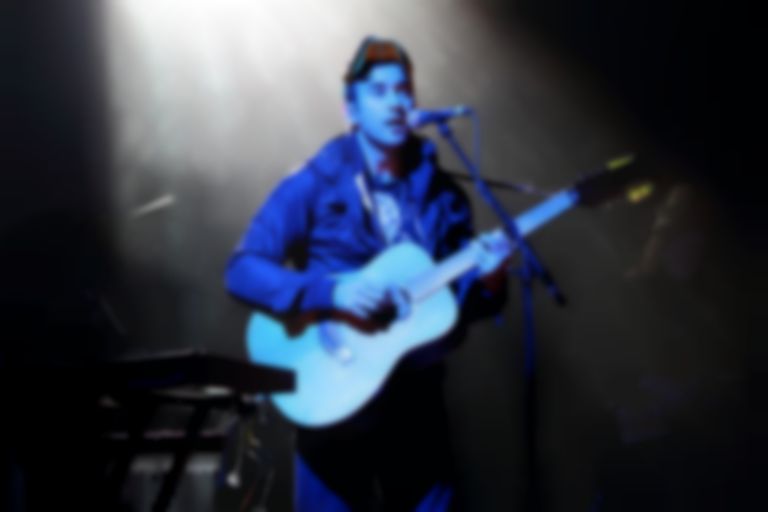 If you were still feeling the effects of Friday night's (tenth birthday) partying at End of the Road by Saturday afternoon, you could have done worse than let Welsh wizard H. Hawkline ease you into proceedings with a fine set on the Garden stage as part of Heavenly Records' 25th birthday celebrations.

Perhaps best (and unfairly) known as drummer for Cate Le Bon, Huw gave the crowd a series of psych folk songs taken from his In the Pink of Condition, slowly rousing the seated crowd from their reverie with the highlight being "Moons in My Mirror".

Later in the tent, former member of The Walkmen Peter Matthew Bauer played songs from his Liberation! record with a band he only found via Twitter the previous day, but the show was so completely seamless you would have thought this was a band who had been playing together for years. Ending on a raucous version of "You Are The Church", it'd be a real shame if this was the only time this band ever plays together.

Celebrating their own extended history with the festival, Slow Club cast an enrapturing spell on their audience, bold melodies enchanting as much as their between-song banter amused. Elsewhere, Girlpool's stripped back sound offered an ethereal pause amidst the bustling to-and-fro of the event. Steady harmonies and resounding guitars drawing an impressive crowd under a starry canvas. Meanwhile Cate Le Bon and Tim Presley, performing together as DRINKS looked perfectly at home on the Garden Stage, bringing their buoyant songs and addictive rhythms into an off-kilter existence in the sunshine. Their debut album might be just over a fortnight old, but each song is greeted like an old favourite.

Twenty-year-old (but damn does she look so much younger onstage by herself) Flo Morrissey is the perfect mid-afternoon point to relax in the Tipi tent amid the usual festival chaos, her gentle folk augmented with a cover of her namesake Stephen's "Irish Blood, English Heart". If that was too gentle, the over on Woods stage My Morning Jacket delivered the goods in their usual completely reliable rock and roll style, mixing their set with songs from new album - and return to form - The Waterfall, such as life-affirming opener "Believe" with a series of older crowd pleasers like "Victory Dance" whose series of crescendos had the crowd eating out of the palm of singer Jim James' hand. James, as always, was in his element conducting his band and the crowd, resplendent in a series of fashionable and on-point capes.

Ex Hex's raucous power-pop is already a favourite of many. On the Big Top stage the three-piece lived up to all expectation. Dressed head to toe in black, the trio donned rockstar personas and relished every moment in the spotlight. They may have only just arrived on site in time, but there's nothing remiss about their performance. Later, performing a secret set on the Tipi Stage, the band remain completely in their element, and the gathered crowd hang on every chorus hook.

Of all the sets this weekend so far, Saint Etienne is the one with the most elation. Bubbles and balloons soar over the crowd, whilst Sarah Cracknell proclaims the show as "one of the best nights of my life." Blowing kisses into the crowd as they dance to every rhythmic groove, there's a definite sense that there's nowhere else anyone would rather be.

But the night was really about Sufjan Stevens. Reducing the crowd to tears with songs from Carrie and Lowell which went between faithful acoustic-based versions of "Death with Dignity" and the title track, to electronic reworkings of "All of Me Wants All of You" and "Blue Bucket of Gold" which now ends in a stunning ambient noise-out, it was a perfect set from Stevens. The fact that it was performed under the stars just made it feel extra special. It was interesting to note how Stevens has also repositioned songs from his back catalogue, such as "Casimir Pulaski Day" and "Sister" as part of the Carrie and Lowell tour, these tracks previously part of the Stevens myth-making now as personal and honest as his most recent work. With the aid of some brass players we were also treated to a rare Sufjan-goes-Krautrock motorik version of "Chicago", and once again the tears flowed. As a clearly humbled Stevens thanked the crowd over and over again for their help with the song there was only one response forthcoming: Sufjan, we love you too.