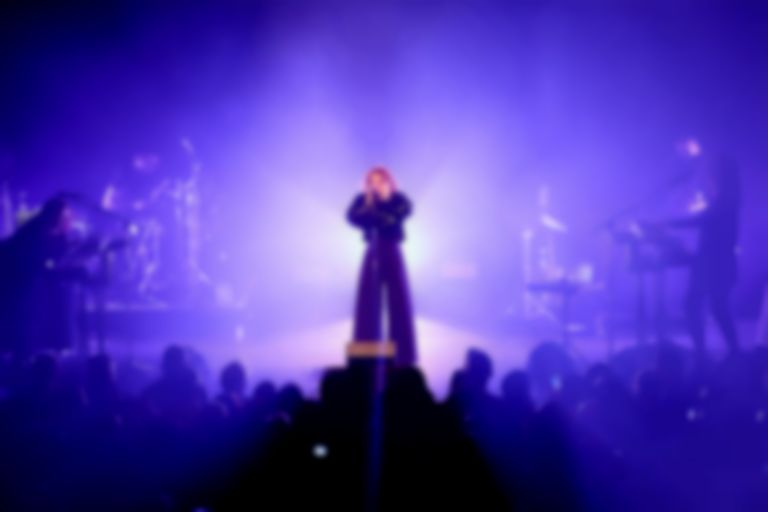 To walk along London’s South Bank to Somerset House on a balmy Sunday evening is to experience of one of the most glorious parts of the city.

It’s a walk that’s strewn with buildings and a skyline that mixes the modern with the historical. The riverside is filled with a characteristically diverse mix - those who’ve had one beer too many, buskers and couples of all ages taking a stroll along the river. Walking over Waterloo Bridge is to see one of the city’s most panoramic views, and an evening in the company Goldfrapp feels like a perfect way to complete the walk.

And so it proves. Tonight (9 July) Alison Goldfrapp and her band play a set that draws on their adventures in electronica that’s a wonderfully cooling tonic to the mini-heatwave that London is experiencing. Despite clouds appearing throughout the day, the sun keeps its hat on.

Opening with a cinematic double-header from 2000’s Felt Mountain - the magically otherworldly “Utopia” and the Ennio Morricone infused “Lovely Head” - the surrounds of Somerset House are a suitably cultured setting to witness such music. From there the set draws predominantly from this year’s Silver Eye and 2005’s Supernature, as Alison Goldfrapp, clad in a black outfit, struts back and forth across the front of the stage, lost in reverie.

One of the features of a show at Somerset House is the mobile beer sellers, who carry a flag bearing the brand of their wares. After a thunderous “Train”, one of them catches Alison Goldfrapp’s attention who quips “I’m weirded out by the little guy with the lager sign, he keeps winking at me” before winking back at him, ramping up the bonhomie of the evening in the process..

Mid-set, slower tempo cuts from Silver Eye chill the tempo down, providing as much respite for the players onstage as they do the audience after the giddy opening and the summer evening heat. The energy is lifted with an effervescent “You Never Know”, where the detachment and tease of the vocal channels an electropop version of Marlene Dietrich.

As the sun sets she adds “It’s getting dark, we like that”. The dusk is a suitably nocturnal setting for the electronic songs played tonight, which would be equally as at home in the Somerset House courtyard as they would be in a nightclub.

Before a triple whammy from Supernature, starting with “Number 1”, Goldfrapp speaks with wonder of the Pride march that took place this weekend, another reminder of what a united city London can be. For all the thrill of the electronic arrangement the mix of tenderness and longing in the lyric and vocal gets to the heart their aesthetic.

A breathless “Ride a White Horse” follows, as darkness descends across the courtyard and the lightshow starts to earn its money before “Ooh La La” closes a peerless trio of songs, where the glam of the vocal is echoed in the nods to Marc Bolan

With such a formidable back-catalogue, there are of course songs that can’t be squeeezed in; “Rocket” and “Black Cherry”, with their respective pop chops and melancholy, would have slotted into set perfectly, but Somerset House has a strict curfew after all.

They close with Black Cherry’s “Strict Machine” and it’s inherent joy and disco leaves a Sunday night London audience suitably energised, as we file out of the courtyard to the sound of Blondie’s “Call Me” booming over the PA.

Walking back across Waterloo Bridge, it strikes me that London’s night-time skyline is as picturesque and cinematic as the songs played this evening. With the National Theatre draped in the lights of Pride’s colours it’s a reminder of what a beautiful city London can be, where love and tolerance still make their voices heard. Tonight, with their songs of devotion and dreams, Goldfrapp provided a fitting soundtrack to just such a feeling.