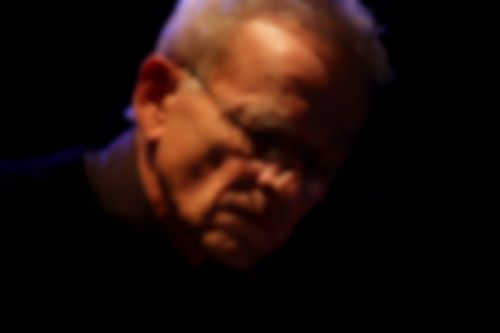 How can I, a lowly scribe from the rural backwaters, review a legendary figure like that of Dieter Moebius? One of the founding fathers of Krautrock as a member of Cluster, he’s worked with some of the finest music makers alive, including Brian Eno and, one of his regular collaborators, Hans-Joachim Roedelius.

It felt like he was slumming it tonight, operating out of the back of the Haymakers pub in Cambridge. It didn’t seem to bother him though as he took to the stage, looking a lot younger than his 66 years. A bottle of Becks in hand, a quick swig, and he was off…

Tonight’s set was a laid-back affair punctuated by moments of upbeat tempos and noise. Flirting with his more ambient palette, each piece of music had distinct movements and themes. It was almost like taking a sonic trip across the globe. Moebius was a musical magpie, picking pieces of music that hinted at far-off places.

Without the aid of a laptop, each piece was immaculately pieced together, his hands, like a pianist, slowly working the half a dozen pieces of cabled equipment. This rumbling framework was prone to piercing icicles of sound and, occasionally, rapturous beats that hinted at the more techno side of Moebius’ back catalogue. More often than not it was the crackling spirit of analogue noise that prevailed, sounding as fresh now as it did back in the early 70’s.

Whilst not everything worked in the hour-long set, it was a musical journey that transported the crowd from dream to euphoric states in equal measure. Moebius’ management of sound reached its peak as the grand, swelling and popping finale flushed the venue of its mundane atmosphere and left no-one in doubt that they’d seen a master at work.