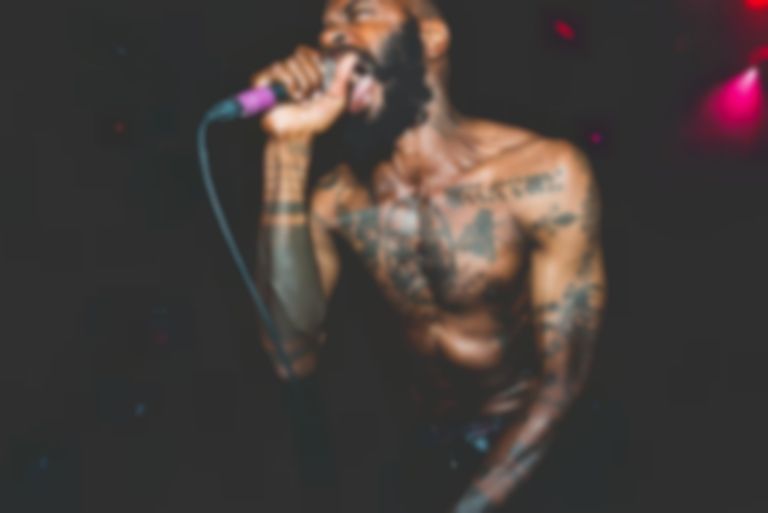 Death Grips are defined by their reputation as much as their music. From leaking a would-be major label release with a dick pic, to a committing a string of high profile no-shows at live gigs (and sending what appeared to be a fan’s suicide note in their stead) the band have made a valiant effort at genuinely pissing people off in a culture almost wholly desensitised to transgression.

Tonight (29 October) at the Roundhouse – an astonishingly big show for a band who have managed to retain cult status – Death Grips subvert their own reputation. Coming onstage in matching, hyper-sharp navy suits, they seem to be purposefully playing around with their aura of being total degenerates. And while the outfits make this point on the surface, the set itself is more conclusive evidence of their professionalism. You simply can’t play with that intensity, for an hour and a half without any breaks whatsoever, without being deeply committed to your performance.

Zach Hill stands out in particular. His drumming is rightly lauded as being one of the more propulsive ingredients of Death Grips menacing, post-apocalyptic sound, but to see and hear it live is something else. It seems borderline inhuman, in fact, to see someone beat the living shit out of a kit like that for 90 minutes straight, with absolutely no breaks between the songs. And in a tie and collar no less. As part of the sheer visceral force of the show – and this is a set soaked in sheer visceral force – Hill distinguishes himself as a truly valuable asset.

As chaotic and frenzied as Death Grips are on record, it’s just a fraction of the power they achieve tonight. Firstly the sheer volume of the set is truly overwhelming. It’s an absolute avalanche of sound. But with the addition of Andy Morin as a third member on additional electronics, they’ve brought a greater range to their music, creating textures which contain a surprising amount of detail and nuance within their searing scream of noise.

The audience make a good show at matching the intensity of the band. Pretty much immediately, the place absolutely erupts into violent motion. Drinks are hurtling, pits break out, and massive swirls of jumping people extend right to the back of the room – creating an ocean of action which I’ve rarely seen at an indoor event, and never with such sustained passion. It’s genuinely impressive. At the same, it seems a pretty legitimate response to what’s happening on stage, and in our eardrums.

There is something in the music of Death Grips which really taps into the unique disenfranchisement of the 21st century. Songs like "I’ve Seen Footage" land as anthems of the connections between fragmentation, digitisation and desensitisation. Make no mistake, this is a punishing and difficult hour and a half of music, but with an oddly cleansing power, leaving you as refreshed as you are bludgeoned, like a sandblasted wall. And as they move further and further away from the relatively feel-good listening of breakout The Money Store, their music is becoming even more twisted, challenging, and perfectly suited to our times.