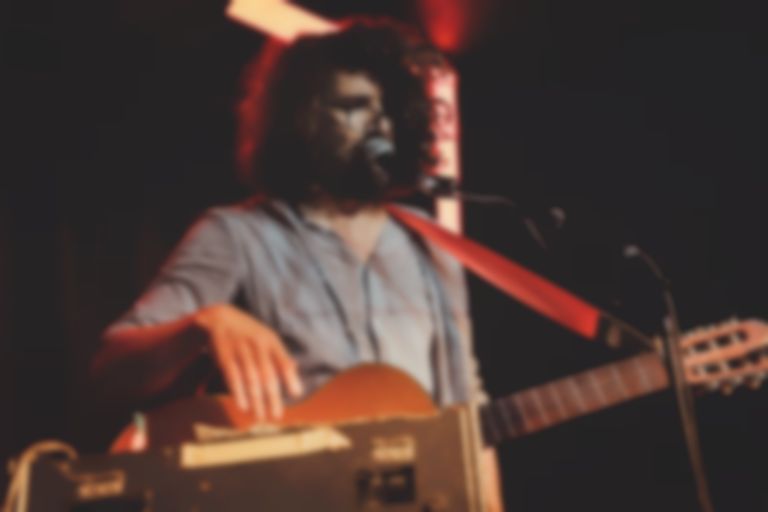 Lou’s on his own tonight (Hoxton Bar and Kitchen, 5th October) - no support, no band.  He comes through the crowd, stepping on my mate’s foot as he passes, but stops to apologise.

The stage features a strange little box synth sat on a bar stool. It looks like half a Moog has been built into a portable turntable. I like the optimism of no ad hoc stand; I feel relieved for him that it’s at perfect playing height.  He checks his box synth which sings in bassy tones and waves. A benign heckler shouts “thank you, goodnight!” from deep in the crowd. Lou chuckles, “I always wanted to be a noise artist.”

The show begins with a fancy uke, an old tag hanging from the headstock. It sounds full and warm, the perfect foil for Lou’s voice, as he plays through songs from his latest album. He tells us it’s the first time he’s played a show in any of his bands built on new material and he’s nervous. He sings through his mass of curly hair which covers his eyes and joins his beard like a hair mask. It’s like Cousin It got a haircut and devoted himself to indie rock. Only as he grows more confident does he sweep it from his face.

It’s testament to the greats that as I watch his hands he’s doing nothing special, but I can’t help but think how those chords in my hands would be wasted, aborted ideas without enough inspiration to see them through, but paired with his voice, rich like gilded butter, he turns would-be bedroom jams into gold. That and the way he throws the chords together. So much movement and change for a man basically credited with the birth of lo-fi. He plays one last song from Sebadoh’s last record Defend Yourself before pulling out a classical guitar and continuing with songs from the Brace The Wave.

He begins and fluffs “Divided” then stops and apologises for getting nervous before starting again, ripping into a key solo over looped guitar at the end. A legendary figure, humble and apologetic when he could just as easily be an arsehole.  Lou claims lack of charisma but he’s absolutely charming in his understatement.  He talks about his loop pedal and how he makes it work sometimes and of seeing Andrew Bird (“I’ll never be as good as him with my loop pedal, and he’s just so handsome too.  Tell me I’m pretty?” he jokes).

Lou adjusts his capo three times before settling on the right key for his self-proclaimed folkiest song, “Lazy” and tells us of his fear of the folk police coming for him for inadequate technique.  “I’m gonna do some finger picking, but now that I’ve said that they’re gonna seize up”. Throughout, his guitaring flutters like a heartbeat, flitting between excitement and bashfulness as he rushes this part and drags the next. We later find out the only time he’s seen his synth outside of his own possession is in the Rock And Roll Hall Of Fame as the synth The B-52s used.  “Now would be the perfect time to play one of their songs.  But I don’t know any.”

The second half of his set is comprised of mainly Sebadoh and Folk Implosion songs, his charisma building with his confidence.  Mistakes are laughed at without stopping and he tells more stories, my favourite being Lou at a karaoke bar with Sleater Kinney after a show in Portland, Oregon, when The Folk Implosion’s “Natural One” was enjoying some chart success.  So much so that it had made it’s way onto the karaoke machine where he was made to sing it by Janet (“the one who smiles”); “he wrote this song, you have to let him sing it!” she implored.  And so he did.  He ends the set on Dinosaur Jr. song “Imagination Blind” and comes back after a brief exit (“I don’t know why I do that, I just wanna keep playing”).  An already great evening is topped off with “Beauty of the Ride” and “Vampire”.

Charming and endearing throughout, this intimate solo show seemed to be everything everyone could have hoped for, as I look around at us all bathing in the light of his brilliance. We exit, satisfied and smiling.