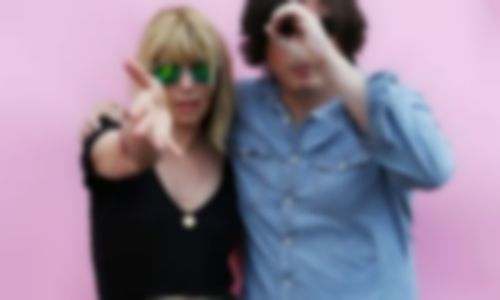 Usually if arriving at Cafe Oto – Dalston’s continually wonderful weird music hangout extraordinaire – before doors at about 7.30, you’re pretty much guaranteed a table at which to sit, drink your Belgian ale and munch on an organic pastry as you wait for your headliner to arrive. It’s a brilliant way to spend an evening. For the visit of Body/Head, there’s not only a substantial queue formed by that point, but the tables are nowhere to be seen. It’s a busy one, with people who are far too old to be making a beeline for the front of a gig doing just that, leaning on a pillar if they’re lucky, and staying put all night.

Such enthusiasm is understandable. After all, it’s not often we get to stand quite so close to a venerable rock legend like Kim Gordon doing her thing, but the music she’s made as part of the duo she formed with Bill Nace since the disintegration of Sonic Youth really does reward patience and close attention.

Perhaps this is the reason they provide quite so much in the way of visual accompaniment to their all-but-wholly improvised guitar dual; even when the pair are eking out the creepiest of intonations from the same two-note pattern for minutes on end, it’s hard not to be mesmerised by everything – from Gordon’s dazzling gold boots to the dark, borderline eroticism of the peculiar story of two artists being played out on the screens behind them. Even if you’re not of the mindset to become fixated on every nuance of this wilfully strange music, you will transported there.

Not that the music isn’t transfixing enough on its own. Nace, comparably, isn’t much to look at – with his plaid shirt, long hair and stubble, if he were the other side of his guitar monitor he could pass for the kind of person usually seen sat with a Belgian ale and organic pastry in Cafe Oto. But the way in which he coaxes noise out of a guitar is quite remarkable. Whilst Gordon’s six-string duties in Body/Head (tonight at least) revolve mostly around providing the whole thing with a hypnotically rhythmic and textural base, Nace has free reign to get down on his knees, sway back and forth and conjure all hell from his amp and pedals. Whirring noises that spin off in to the ether, screeching that sounds like a pan of guitar strings left on the boil, imposing guttural drones – all are at his disposal.

Yet though it’s quite a noise they’re making, it’s far from cacophonous – disquietingly so, in fact – as instead of punishing one’s ears, their guitar interplay is often there primarily to serve as a focus for Gordon’s inimitable vocals. Whether she’s working out new songs on the spot or making this stuff up on the go, the titbits of dialogue one’s able to decipher are delivered with just the right mixture of abandon and control. For the closing “Black” – the only song performed to bear any real resemblance to anything on their magnificent Coming Apart LP – she wanders trance-like in to performing a radical take on folk standard “Black Is The Colour (Of My True Love’s Hair)”, transforming its declarations of love in to something altogether more sinister. Such is the power of Body/Head’s music, they could probably make “Always Look On The Bright Side Of Life” scare the living daylights out of you too.