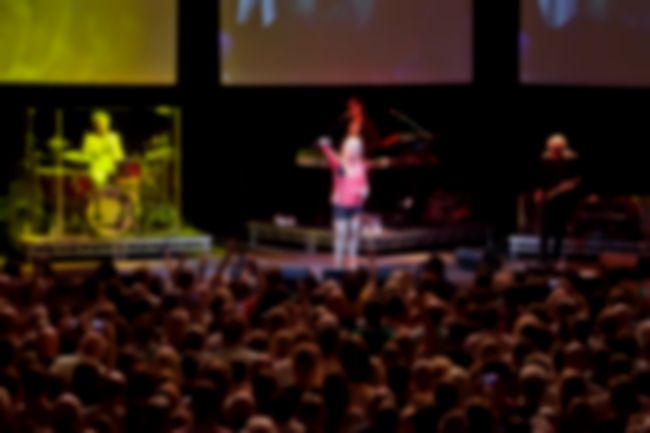 It’s not been a bad year for the old-timers. Resurrected from their crypts through dark and ancient magic, The Rolling Stones delivered storming sets at Hyde Park and Glasto, over half a century after they first corrupted the nation’s youth with their rakish, “rock-and-roll” shenanigans. Bruce Springsteen, at 63, had us dancing in the dark at Wembley. And tonight, in the comparatively intimate confines of the Camden Roundhouse, Blondie conclusively prove that being of pensionable age is no obstacle to being a rock star.

In many ways, it’s difficult to believe Debbie Harry is 68 years old. She certainly doesn’t look it, and although she’s understandably not got quite the ball of energy she used to, she retains the charisma that made her performances so electrifying back in her heyday. True, there are moments where her vocals seem a little restrained, a little less forceful than you’d expect, but as ‘Heart of Glass’ attested, when it comes to the punch, she can still belt them out with the best of them. There’s rarely any sense that after almost four decades she’s phoning it in (although she definitely seemed more animated when singing newer material), and that in itself is quite admirable.

But what of the rest of the band? In the late 70’s, they famously issued badges pointedly stating “Blondie are a band”, as many presumed that the monicker related to Ms. Harry alone. Tonight, though, there’s no denying that Harry is their driving force, the very core of their appeal, and without her, they’d be a competent, but unspectacular live act. Tommy Kessler is granted the odd moment to showboat, especially during set highlight (wooooh, ohhhhh) ‘Atomic’, and Clem Burke’s technically excellent, “take no prisoners” style of drumming works well on the livelier numbers, even if its unsubtlety gets grating on ‘The Tide Is High’, but all in all, the rest of the band appear to be going through the motions.

Luckily, the quality of the setlist more than compensates for the sometimes workmanlike delivery; all the classics get an airing, and if more big bands adopted the “two lesser-known songs, one hit” principle to pacing their sets, the world would be a better place. Blondie aren’t the greatest performers in the world, but with a back catalogue as exceptional as theirs, do they really need to be?