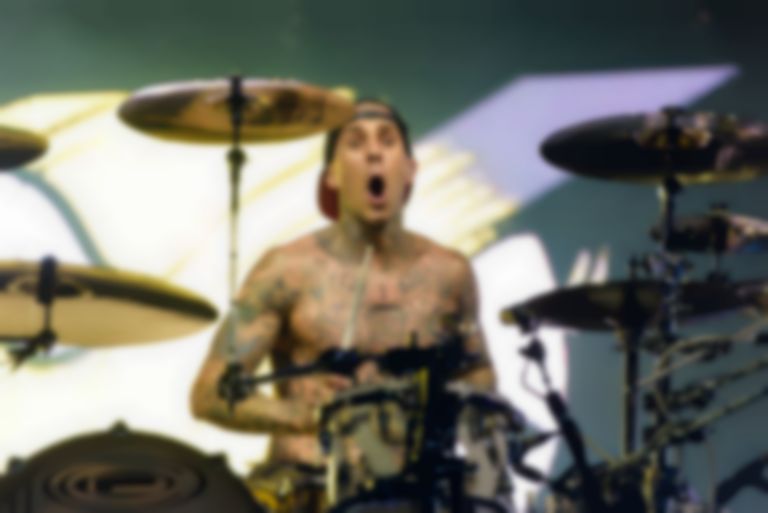 Every so often, a line-up comes around that’s so perfect one can’t help but wonder if it hasn’t been put together specifically for oneself. Tonight is one of those occasions. With Blink-182, Frank Turner and The Front Bottoms all having played important roles at some point in my life, this wasn’t a line-up I was going to miss.

Originally booked for Manchester Arena prior to the events back in May, the relocation to the outdoor surrounds of Castlefield Bowl is something of a blessing, despite the reasons behind it. Much more intimate (as far as 8,000 people can feel intimate), the anticipation in the air is palpable, and as we make our way through the festival-esque bar area, the opening notes of The Front Bottoms’ set begin to ring out.

No strangers to Manchester, but arguably unaccustomed to such large surrounds, the New Jersey four-piece take things in their stride. Opening with "Skeleton", it’s immediately obvious that for much of the crowd, this is their first taste of The Front Bottoms’ idiosyncratic pop-punk, and their reaction is mixed. That said, there are those who shout back every word, open up good-natured circle pits, and crowd-surf with reckless abandon. Perhaps the strangest aspect of the band’s set is their choice of stage decoration. A single sofa is placed centre stage with a member of their touring party sat looking out over the crowd. It’s odd, but somehow appropriate, and even though there were occasions when the seated man looked bored, even checking his phone more than once, you couldn’t help feeling a little jealous. Interestingly, the band also opt for two drummers on a handful of numbers, providing their back-line with a little more clout.

Despite their short set time, The Front Bottoms manage to cover their back catalogue impressively well. And with a closing duo of "The Beers" and "Twin Size Matress", arguably two of the band’s strongest songs, you can guarantee that the band walk off stage having earned a few more fans. There was every chance that their semi-acoustic aesthetic could have been lost in the outdoor setting and a largely unfamiliar crowd, but the band step up to the mark. Impressively enough for an opening band, theirs is a tough act to follow, but if anyone could do with ease, it’s Frank Turner and the Sleeping Souls. Now on show 2070, Frank Turner's material is significantly more familiar to this audience, and the atmosphere refuses to be dampened by the predictable Mancunian rain.

Much like The Front Bottoms before him, Turner’s covers his entire back catalogue, the likes of "Try This At Home" fitting in comfortably with more recent material. Though Turner’s popularity has soared in recent years, his shows feel more like a singalong with friends than your usual arena fare. Tonight is no different, and his set hinges on an energy that even headliners often struggle to muster. Almost every song is met with a riotous response, and even the rare few who appear unfamiliar with Turner allow themselves to dance along, or at the very least offer a wide grin. Ending with his traditional closer of "Four Simple Words", it’s clear that Frank Turner is a man at the very top of his game.

The story of Blink-182 is a strange one. Or at least the more recent chapters are. Having replaced founding member Tom Delonge with Alkaline Trio’s Matt Skiba, arguably pop-punk royalty in his own right, the band became a bone of contention, with many older fans questioning whether this was indeed still Blink-182. It was question I asked myself, and the release of "California" last year did little to answer it. I approached tonight with an open mind, and while it’s a little jarring at first to hear Skiba’s vocal instead of Delonge’s trademark nasal whine on tracks such as "First Date", it soon becomes apparent that he’s more than a replacement. He brings something new to the band. And while purists might well turn their noses up, it’s fantastic to see a band who played a big part in so many people’s lives writing new material and touring again.

The whole evening has the air of a festival, and Blink are perfect headliners. Rattling through an impressive 22-song set, with last year’s "California" forming the backbone, it feels like not so much a return to form as the next stage in the band’s career. Though new tracks such as "Bored to Death" or "Cynical" fall flat compared to the more established tracks in the band’s catalogue, they're still identifiably Blink-182. While references to incest and bestiality might well be a thing of their past, the inclusion of "Happy Holidays You Bastard" and "Built This Pool" suggest that the band though might have gotten older, they don’t want to resign themselves to growing up just yet.