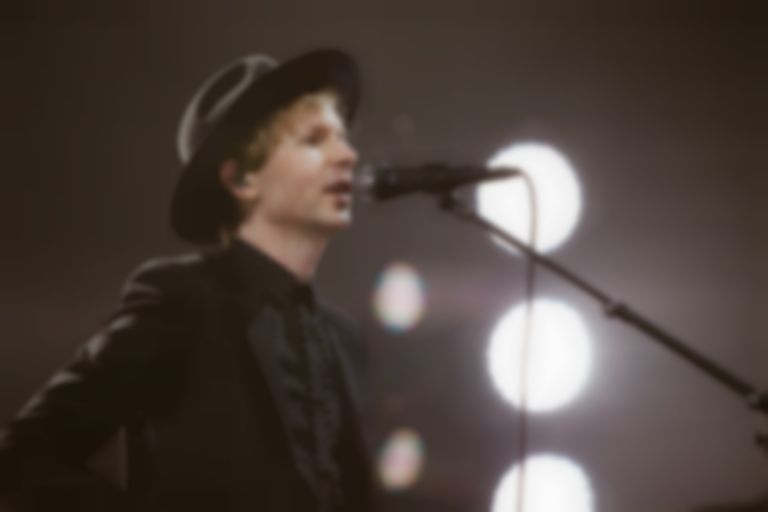 Though some took to Twitter to bemoan the ticket’s £60 price tag, many were happy to bite the pricey bullet, and quickly filled up the venue's 1000-odd capacity with ease.

Though the impromptu show was on eve of the release of new record Colors, this was no album listening party; on the contrary, the artist delivered a set that spanned the wide breadth of his eclectic music vision. "We’re gonna start out slow tonight", he announces, opening the set with the calming alt-folk of “Blackbird Change” and “Blue Moon” from 2014’s Grammy-winning Morning Phase, and "Lost Cause" from 2002's similarly restrained Sea Change.

Though it seems something of an anti-climactic start — especially given his delayed entrance —the quiet opening makes sense later as the dynamic arc of the set unfolds. After a deliberate lull, the singer dramatically steps up a gear, playfully asking if he can "disrupt your contemplation for a moment?" as a switch to electric guitar announces a move to the psychedelic brit-pop jams of “Devil's Haircut” and “Nausea”. This blends smoothly into his distinct blues-rock material such as “Black Tambourine” and “Go It Alone”, a little slower in tempo but heightened in energy. The bizarre of Mexican trip-hop jam “Qué Onda Güero” is a particular pleaser, its drunken vibe apt as the evening turns to night.

Though the live translation of “Wow” sounds powerful, and a debut of “Colors” marks the occasion well, it’s a shame that the massive “Dear Life”, one of the new release’s strongest numbers, isn’t included. An encore medley in the midst of "Where It's At", including The Clash’s “London Calling” and a nod to the recently late Tom Petty with “American Girl”, is a great touch, though, adding a dash of authenticity to the show's impromptu and informal air.