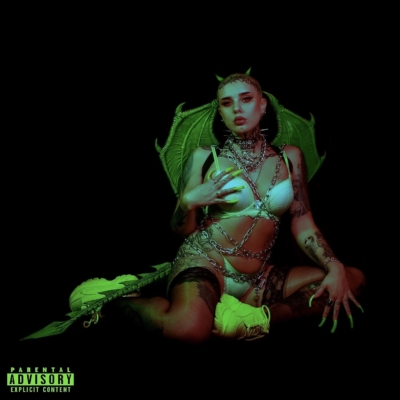 From taking down SWERFS and TERFS to educating listeners on being non-binary and coming out, ZAND is not here to make themselves smaller in a space where they have consistently been told to do so. Twisting insults on their head turning them into strengths seems to be their forte on debut EP Ugly Pop, for example, lead single “Inappropriate” sees ZAND revel in being told they make too much noise, and wholly embrace being ‘too much.’

The 4-track EP is relentless in its darkness and includes previously released abrasive electro-pop singles “Freak” and “Slut Money.” ZAND has said of their manifesto, “Ugly Pop is a very intimate project to me, with it being the first body of work centred around my own genre as an ‘ugly popstar.’ This EP acts as a little taster. I’m stoked to be birthing this little batsh*t part of me out into the world.” The EP’s title mimics their self-coined genre of ugly pop, which seems to be playful and disruptive pop heavily influenced by the likes of My Chemical Romance and Paramore. Opening track ‘bald bitch’ announces this sound and image alike as a powerful symbol of what’s to come.

This unabashed dominance and confidence is, in fact, particularly relatable as it has clearly come from hard work towards self-love. This is highlighted in “Freak”, where ZAND hits back against name-calling; “Sorry if you don’t understand / But I know exactly who I am.” The Blackpool born artist is truly a triple threat; singer, songwriter and producer, creating powerful anthems which sit somewhere in between Riot grrrl and 100 Gecs.

A highpoint of the EP is track “Slut Money”, consisting of a catchy refrain that will stay in your head for days to come. The track illustrates the raw and real highs and lows of being a sex worker using sites such as OnlyFans for primary income through lyricism such as: “If me / And all my friends had a penny for every time / That we've been called a fucking slut just for doing what gets us by / Well then the stacks would be flying above the high horse you sit on.” This type of story telling over dark distorted production is reminiscent of Ashnikko or even Billie Eilish, however it feels that ZAND still has a long way to go and we look forward to seeing what comes next.