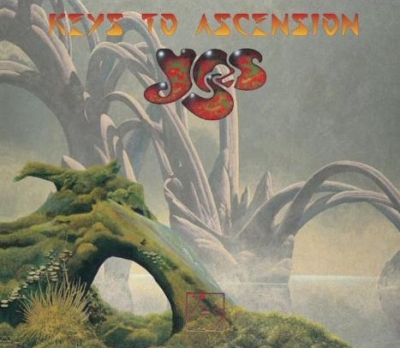 I’d be curious to know how many people will read this review. I’m sure Yes, the seminal prog-rock band, aren’t deemed to be TLOBF material. But, without them, I’d never have found myself writing about music. They played a formative part in my upbringing, listening to their early work like Fragile and Close To The Edge opened my mind from the narrow range of indie-pop I’d found myself playing ad nauseum thanks to the blinkered approach of the NME. It’s become fashionable to hate on these pioneers, but without them acts like Radiohead and The Mars Volta would not have existed.

Well, if you’ve got through that, and you’re still here, you’ll probably already know what the Keys To Ascension is. It’s a bumper four CD, one DVD collection that’s set out to capture the concerts from the 1995 reunion tour, put into one set rather than two separate collections. Now, Yes have changed personnel more often than most, and it’s almost impossible to pin down a “definitive” line-up, but this ’95 tour did see the the most celebrated line-up tour again: Jon Anderson, Chris Squire, Steve Howe, Rick Wakeman and Alan White. Three of the four discs are a live concert recorded at SLO in 1996, with the fourth being a collection of studio recordings made at the same time, and the DVD is a film of the same concert. Oh, and let’s not forget that we’ve got some original artwork provided by the ever excellent Roger Dean.

The live concert itself is pretty much perfect. Tracks such as ‘Time and A Word’ , ‘I’ve Seen All Good People’ and ‘Close To The Edge’ still retain their original, epic and,  with ‘Time and a Word’, their emotional impact which is sometimes forgotten that Yes possessed. Perhaps some of the tracks lack their original dusty qualities, the band themselves are obviously much more accomplished players now than they were 30 years previously, but Keys To Ascension is a snap shot of Yes in ’95, not ’75. There’s an obvious excitement within the band of playing live together after all these years. The DVD shows this: the band look happy and willing to play these songs again. For the first time in years, the ego has been put aside and the music comes first.

The studio recordings disc is actually surprisingly good. Four years on from their previous “reunion” album Union, it feels as if they’d gone further back, and avoided the “radio friendly” attitude of that album. These songs are multi-movement pieces – changing time signatures, sounds and influences all within one track. The epic ‘Mind Drive’ is nigh-on 20 minutes, but feels surprisingly fresh and interesting. Sure, you’ve got to get past some of Jon Anderson’s rather “spiritual” lyrics, but just listening to Squire’s seminal guitar work on ‘Foot Prints’ will banish those from your memory. Considering it’d been a while since this line-up had been blessed with studio time, they’ve taken advantage of modern techniques to make their supreme craftsmanship shine through even more.

If you’ve already got the original Keys To Ascension albums, there’s not really much here to make you splash the cash. But, for those who haven’t or want a showcase for latter-day Yes, it’s a perfect place to start. Certainly better than the awful Talk album released in ’94… No wonder they wanted to do something different.