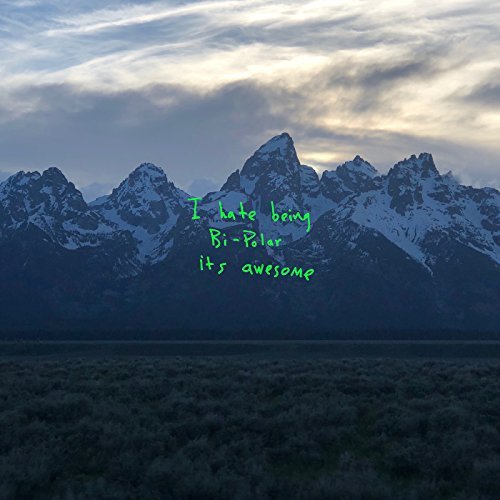 Kanye West is lost. That does not need playing out here, or explaining in a review of his latest record – his eighth (canonical) LP, that has a running time closer to one side of a vinyl. This is a snapshot, a Polaroid, of who and what Kanye West is at this time, not a grand statement or a Serious Album. This is not another Yeezus, or another My Beautiful Dark Twisted Fantasy. It’s not even another Life Of Pablo.

All the clues you need are there – in front of you – on the horrific album cover. It’s an Instagram-worthy mountain landscape defiled by a slime-green slogan (“I hate being Bi-Polar its awesome”). It’s who Kanye is now, ladies and gentlemen.

The themes that ooze out of this latest record as readily as they have previous records – self-harm, hatred, homicidal rage, toxic masculinity, drug abuse, delusions of grandeur – have never felt more counterintuitively alienating or distancing.

We are encouraged to see things from the perspective of a broken man. A black skinhead who champions Donald Trump. A revolutionary producer who can’t be bothered to finish his own tracks. A legend of a different generation, now reduced to a shadow of his former self.

The worst part is, though, that there’s no through-line. No concept. No consistency. There’s certainly no quality control. Going one step further, you could even assume that this is no album at all, but a collection of thrown-together musical orphans sent out into the world to be monetized and exploited.

They’ve gone from half-finished to headlines. There are already essay-length breakdowns of each of the themes. There’s already fawning, sopping wet praise being heaped on top of this thing, like makeup on a corpse.

The opening track, "I Thought About Killing You", is comically bad. Kanye verbalizes a fantasy over woozy, synthetic rushes of sound. He thinks about killing himself, but because he loves himself more than you, you will have to die instead. It’s an interesting, sinister concept that is executed in so poorly that you begin to question where the record is going.

"Yikes" is just as demented. "Shit could get menacing / frightening / find help," go the opening lyrics, before Kanye starts rolling off non-sequiturs about #MeToo and drugs. It’s hard to follow, but he places specific emphasis on his concerns about being accused of sexual misdeeds, like Russell Simmons, and finding himself on E! News.

The singing on "Ghost Town" and "All Mine" is shocking. Painful. Hideous. It’s the kind of thing that you once could, objectively, understand to be joke. Why Kanye finds it necessary to include vocals like that is anybody’s guess. And they’re so incredibly loud - the concept of dynamics is clearly an afterthought. The entire thing is so ridiculously loud that it’s hard to think at times.

The closer, "Violent Crimes", does a little bit to redeem the record. You can even ignore the recycled wordplay – Nicki was the first to point out the similarities between menage and Minaj, right? – because it appears some effort went into the jazz-backed poetry on show.

The feeling that things are unfinished peaks on "Wouldn't Leave", which sounds like a washed-out extension of "Bound 2". This comparison only hinders the overall effect of ye: Yeezus has been knowingly evil, deliberately confrontational – and all the better for it. ye, at best, just sounds like it hasn’t been finished. With the promise of another record soon, we can only assume that it’ll be the other (unfinished) half of whatever this project was.

Make no mistake, this is difficult to listen to. You will not be rewarded for multiple listens. It is what it is. It’s not enough, by a mile. West has clearly made this for himself first, and indulgence is deeply ingrained into the concept. It’s the sound of Kanye exercising, practising, rehearsing. This is not him on a good day – hell, this isn’t Kanye on a good decade.

Listen to it once and you may be struck by the singularly confrontational nature of the record. You may even, subconsciously at least, celebrate it as a return of a revolutionary. But think of the other people you hold to be in the same league as Kanye… would André Benjamin let himself get away with this? El-P and Killer Mike? Kendrick Lamar?

A curious moment happened to me when the album finished playing. "Runaway", from My Beautiful Dark Twisted Fantasy, played immediately after the final track on ye. I don’t know why. Maybe it was destiny, or fate. "Runaway" is the Kanye West you want, but ye is the Kanye West we deserve.

This record is, ladies and gentlemen, a uniquely modern mistake. This man is being indulged to the point of doing irreparable damage to his public image and his reputation.

The Kanye West we loved is gone. This man is a caricature. A copy of a copy. A meme. He is being repeatedly and horrifically let down by enablers and Yes-Men who have not helped him in the slightest – if that was their intention at all. Kanye West is gone. This man, the man we hear on this record, is a cash-cow. A headline. A joke.

Yet isn’t he giving us exactly what we wanted? A first-hand account of the desecration of a bulletproof legacy? Isn’t Kanye giving us a modern-day "Ozymandias"?