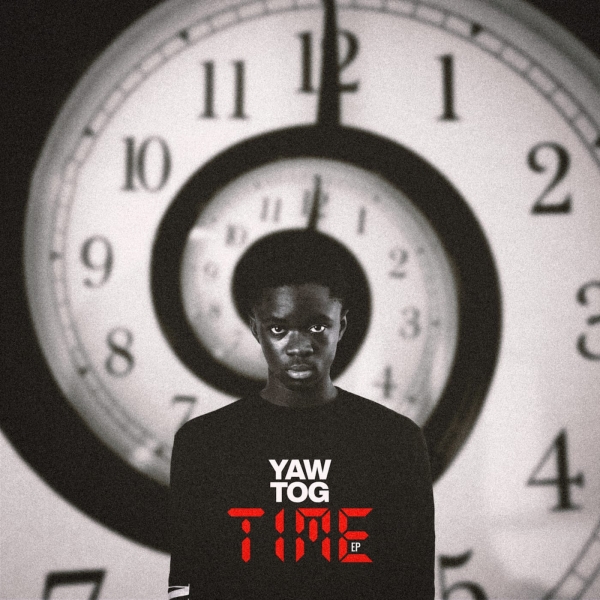 Since its inception in Chicago in early 2010, drill music has now transcended life in the south side, appearing most notably in the UK with the likes of 67, in Australia with OneFour, and more recently in New York with Pop Smoke. You can now add Ghana to the list.

In the impoverished neighbourhoods of Kumasi, the country's second largest city, the Kumerica scene was born. Emerging from the fusion of Kumasi youth culture and that of America’s inner cities, the scene has produced some of Ghana’s latest stars - Kwesi Arthur, Reggie, Kwaku DMC, O’Kenneth and City Boy. None shine brighter however, than the golden boy himself, Yaw Tog. Only 16 years old, his song "Sore" catapulted the scene to new heights, with Stormzy jumping on a remix, resulting in the first Ghanian song to reach one million views online.

Unexpectedly, his debut EP Time portrays Yaw Tog’s ability to be diverse, offering not just straight drill inspired beats, but a collage of afrosoul, and afropop records, more in fitting with the likes of Burna Boy and J Hus. Having expressed a desire to show people this ability, it’s no wonder the tracks are from the afrobeats vein. The influence is apparent with the harmonising notes on the likes of the lead single, “Mood”.

Also exploring themes such as brotherhood, and growing up as one of many young men in the city, there is no doubt who he is doing this all for - a notion easily identified by the catchy refrain “For my g’s ya” appearing throughout the EP's seven tracks. Demonstrating a new approach to the one-dimensional drill sound, Yaw Tog creates a Twi-English hybrid reminiscent of the same bilingual blend found in K-Pop, and a unique style of delivery. Currently balancing the responsibilities of education, it will be exciting to see how Yaw Tog can change the Ghanian soundscape further, once he's able to be fully emboldened by his lifestyle, after all.