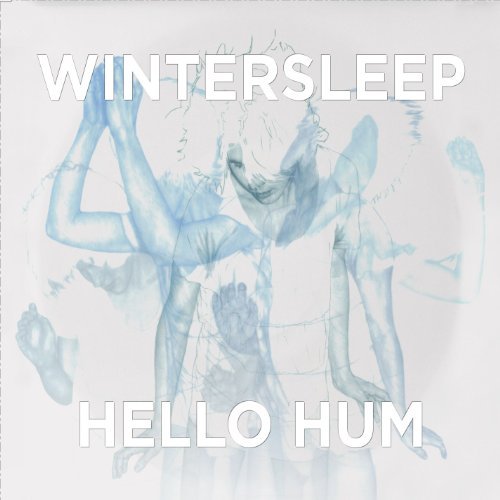 Juno Award winning indie veterans Wintersleep return with their fifth full-length record, Hello Hum, their first since the commercial and critical success of 2010′s New Inheritors. Though the band’s prominence in their home nation waxes and wanes, they still attract a loyal underground following: like Canuck indie titans Arcade Fire they fly low under the mainstream radar, occasionally emerging to wow the fickle masses with their heartfelt indie and win a few awards. The five-strong group may have their fidgety fingers in many pies (Holy Fuck, for example, feature bassist Mike Bigelow), but they seem to always migrate home like geese in the spring to Wintersleep.

A broken shard of mournful clatterings, opener ‘Hum’ is home to a scattered array of percussion, lone-wolf guitar and naively optimistic piano; singer Paul Murphy cracks through the melancholy concrete, providing a slurred National-esque grit in the vocals. ‘Nothing Is Anything (Without You)’ rolls into focus, slathered with stomping kick drum thwomps and country acoustic guitars, which aside from the vocals, make the cut sound pretty darn cheery. Following on, ‘Resuscitate’ continues the theme, with Disneyfied chime glissandi and a kind of upbeat guitar riff which harks back to feel-good film soundtracks from the ’90s.

The record as a whole evokes a kind of delirious, suspicious glee. Everything all has an edgy uptempo-ness, jaunty keys and kinetic drums, but there’s a significant dampener from the absent-minded vocals. Sometimes they’re entirely undecipherable, other times Murphy blurts out a snarling growl which, juxtaposed with the doe-eyed music, seems entirely devoid of hope. This kind of contrasting, thought-provoking indie rock is the kind which transcends the scene it was birthed in and becomes a point of musical reference, a yardstick for which all other indie bands can be measured against – again, as with Arcade Fire.

‘Rapture’ is windswept and rock-heavy, with a palpable chorus and some of the LP’s poppier moments – it’s less inspired than the opening few tracks, but not bad by any means. Overtly sexual ‘Unzipper’ follows suit, also relying on big chords and rock staples to convey its emotion. The result is a kind of cosy and yet still somehow sparse pop-rock, something like being round a campfire in winter – it’s warm but there are splinters of ice working their way into the sounds.

Hello Hum retains a rawness despite its obvious production sheen, and while there are more nuggets of charm than bones of contention, this evolution lags. The endless contrast between vocals and the rest of the band wears thin towards the closing seconds of the album; there’s little respite from the gravelly lungs of Murphy, even in his peppier moments, and it becomes almost tiring to try and listen through his murk. It could be wise to take a leaf from The National’s book, and focus on the disparate and the drab to complement the natural sound of Murphy. It feels as if they are resisting this innate sound, when they should just soar with it.