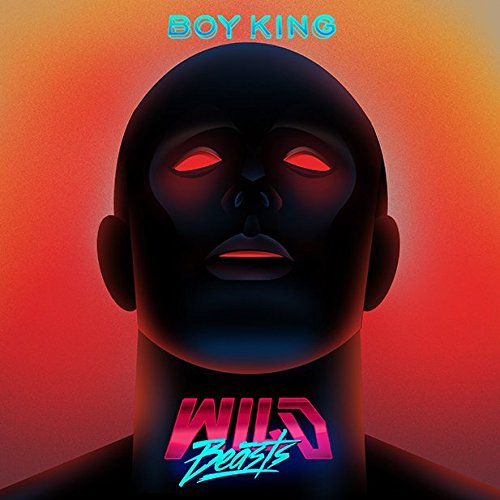 There’s a Louis CK line from one of his standup shows in which he talks about getting in a lift with a guy who’s too cheery. He’s tired, just back from tour, and he recoils from the man with the urge, Louis says, to ejaculate on him: ‘Like a squid or a skunk - not sexually, I mean aggressively.’

And that’s how Boy King comes across on the first few listens, as if it’s squaring up to us, strutting, all testosterone and violent, eyeballing virility. Sure, Wild Beasts have been combative before - the opening of “Invisible” is brutal, slaughtered enemies tumbling into a gaping hole, whilst that synth drop in “Daughters” is still visceral - but this - this is something new.

‘After five records there had to be an element of 'what the fuck?’ said singer Hayden Thorpe of the writing process. ‘It had to be guttural, the absolute opposite of Present Tense - that was the only way of keeping it alive.’ And as “Big Cat” opens with its strip-club eroticism and talk of safe words, it’s clear that they’ve moved on from the pensive introspection of that last album, the quiet spaces and soaring crescendos traded for the burnt-out neon of a seedy alley, bass shivering through the wall of an adjacent club as skin meets sweaty skin.

But then we could tell that from the cover, the colours the sleaze of a red light district and the fonts straight from an 80s arcade machine, the face behind looming forth expressionless yet sinister like Kurtz at the close of Apocalypse Now. It’s an incongruous array, jarring yet compelling, and pretty much a perfect image for an album that weds soulful pop to industrial grit, Justin Timberlake to the Berghein. No more the lilting arpeggios that characterised so much of Smother: Boy King punches more like Nine Inch Nails when Trent Reznor was still sexy, synths strafing and drums pounding like the outro to “Closer” teased out for forty minutes.

Skeptical? We all were, but it doesn’t take long for the band to prove that the hard-left turn was absolutely the best of plans: seconds in and the sound is massive, Hayden Thorpe and Tom Fleming’s vocals sparring over a bed of writhing basslines and shredding riffs and insistent, siren beats, driving and compulsive and with little let-up until the album’s detumescent closer. Wild Beasts have long done cerebral but here they’re hitting the body and it’s difficult - really really difficult, when you’re sat writing this on a silent train through Germany - not to get up and respond.

And then there’s the lyrics. There’s always been a sexual element to their music, from the “girls who whip me” in “All The King’s Men” to the fellatio of “Lion’s Share”, but Boy King is unabashedly filthy, the entendres and lewd asides and bestial grunts sewing sex right through this, red-blooded and panting: “not getting it right, not getting it wrong, just getting it on” sings Thorpe in “Get My Bang”, whilst “Ponytail” tells us that “she won't come lightly/beautiful agony/but no-one can stop it once it starts.” “He The Colossus”, meanwhile, simply laments that there’s 'not enough fucking', an issue that seems likely to be addressed shortly after the album’s release date.

Thorpe worried about the writing, apparently, about ‘knowing what part of myself I was revealing. It's a bit ugly, a bit grubby, arrogant.’ And yeah, it is a different side to him that we’re seeing here, all unfettered urge and quickened pulse, but that’s what this music demands - something dirty and base, something that no amount of cold showers can quite scrub off. Closing track “Dreamliner” might want to ‘begin again’ but we can’t go back, not after this.

Can they? It’ll be interesting to see how the band fit their older material alongside the new, the lullabies of their mid-career and the mad theatrics of their early work next to the heavy-pet of these ten songs, because right now I can’t see that working. Because Boy King does something that only weeks ago would have seemed impossible - it makes Wild Beasts’ back catalogue seem tame.