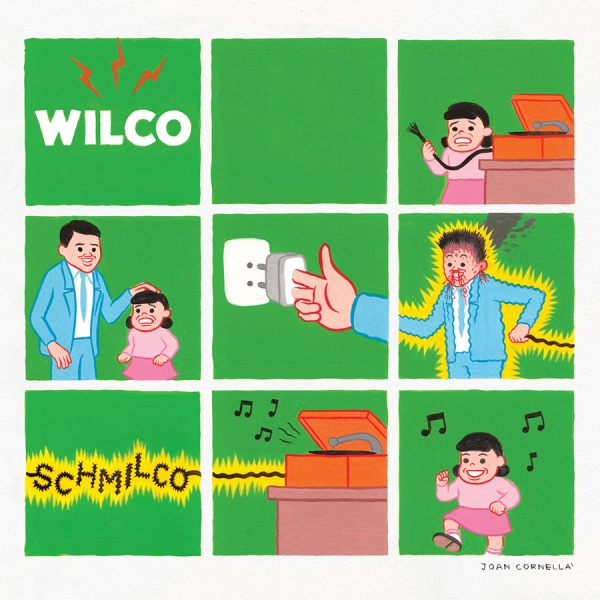 Cult acts - which Chicago’s art-rock institution Wilco undoubtedly are despite the band’s relatively high profile - are a peculiar thing. Whereas die-hard devotees find ample evidence of genius on even their less distinguished offerings, less favourably biased listeners might struggle to see what the fuss is all about.Schmilco (Wilco Schmilco, get it?) is a case in point.

Although never less than beguiling, Wilco's tenth studio album is initially such a slippery, withdrawn and introspective beast that it threatens to slither out of sight before establishing full contact with your ears. It turns out this is precisely the point. Last year's equally daftly titled Star Wars crackled with exuberant, outgoing energy, with the band's good times rock 'n' roll muscles pumped to the max. The predominantly acoustic Schmilco on the other hand eschews riffs, rocking and virtually all of the band's trademark moves; with no obvious crowd-pleasing points of entry, you've to put in a bit of elbow grease to a locate a way into the murky world of this  insular record. There's zero chance of cathartic noise crescendos and gradual build-ups of tension amidst these twelve brief cuts. When guitar wizard Nels Cline and bandleader/songwriter Jeff Tweedy engage in guitar duels, it's in the form of the laidback countryfied strumming & picking of, say, the disarmingly pretty "If I Ever Was A Child" rather than the virtuoso fretboard  histrionics we've come to associate the band with from, say, "Impossible Germany" (off 2007's soft-rocking Sky Blue Sky) or "Bull Black Nova" (off 2009's Wilco (The Album); what is it with this band and terrible album titles?). That said, Schmilco isn't some sort of a retreat back to Wilco's Alt. Country roots; the album's a much less predictable or easily categorised proposition.

Schmilco resembles such equally minimalist undertakings as Lambchop's mega-hushed Is A Woman and Richmond Fontaine's impossibly bleak, dust-blown The Fitzgerald in that it presents a formidably expansive and muscular - check out 2005's classic live double Kicking Television for evidence of Wilco's all-conquering oomph - band operating with one hand willingly tied behind its back. It's about rebooting a signature sound and avoiding possibly over-familiar tricks. Naturally, the sparse presentation also places the spotlight unsparingly on the material.

For the most part, Schmilco delivers. The folkie opening "Normal American Kids" is a bitter, anti-nostalgic flip-side to the wistful reminisces of misspent youth on "Heavy Metal Drummer", nodding towards Tweedy's comments about wanting to make an album steeped in joyous negativity. "Cry All Day" builds up to a mighty gallop by straddling rarely spotted acoustic-motorik dynamics. The unsettling, mystifying "Locator" proves Wilco can handle the abstract and the bristly even with the decibels turned way down low. The album finishes on a series of beautifully weary sighs of songs, with the dreamy float of "Shrug and Destroy" proving particularly disarming.

That said, there are a few too many tunes that struggle to make a lasting impression. Wilco has struggled to put together a thoroughly satisfying album since troubled, brooding early 00's masterpieces Yankee Hotel Foxtrot and A Ghost Is Born (although 2011's The Whole Love came very close), almost as if the band's increased stability has somehow dented the boundless creativity evident in those early works, which were recorded with the band in internal turmoil. Not that there's anything wrong with the customary (albeit unusually sparingly decorated) Wilco grooves such as "Nope" and "Someone To Lose". However, you may well end up hoping for some more of the directness, intimacy and rich emotional resonance that made Sukirae, Tweedy's 2014 duo album with drummer son Spencer (who guests here) so compelling when ploughing through the album's ambiguous middle sections. Even as another merely good Wilco album, however, Schmilco does pay plentiful dividends for listeners patient enough to discover its gradually revealed riches.