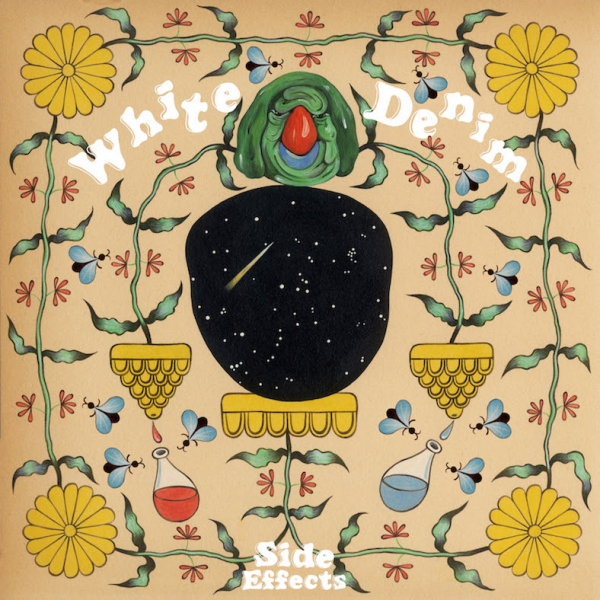 White Denim are a multifaceted act: new album Side Effects is testament to this.

Broadly, listening to the album feels like stumbling across a band in the second biggest tent at a music festival, at about 5pm on the Saturday, and inevitably enjoying it. But White Denim have ten years of work behind them - there is much more to this record than that.

Their versatility is most evident in the range of influences: not just punk and progressive rock, but '70s psych and bluegrass. The true vintage feel comes to the fore in “Hallelujah Strike Gold”, complete with twanging blues guitar and distorted vocal, and in “Reversed Mirror”, in repetitive and pleasingly jarring guitar riffs.

In both tracks we also feel strongly the rhythmic displacement that rears its head throughout the album. This is one of the ways that White Denim allow this record to be challenging, and it’s the challenge that distinguishes it from any old rock. The tone of the album is not wholly consistent, which is a good thing: “NY Money” is much softer in its approach and we are able to appreciate James Petralli’s vocals.

Despite being short, the standout track is “Shanalala”, which is included on EP Reversed Mirror released in February. Its driving tempo and chomping-at-the-bit feel comprise the energy that the rest of the album sometimes lacks. “I don’t believe you” repeats over and over and allows us to enter the musical world; other tracks remain lyrically relatively opaque.

Side Effects is enjoyable, with inspired moments and a consistently danceable feel. It is frequently referential to the band’s previous work, which might make this more of a knockout record for the heads, rather than an entry point for new converts. Sometimes, though, it lacks the drive that reveals itself in the sparkliest songs. One of its best attributes is perhaps that it is refreshingly chaotic and rough around the edges for an act a decade into their career. It’s a fun springtime listen. And it’s admirable that White Denim have not allowed themselves to be sanded down.