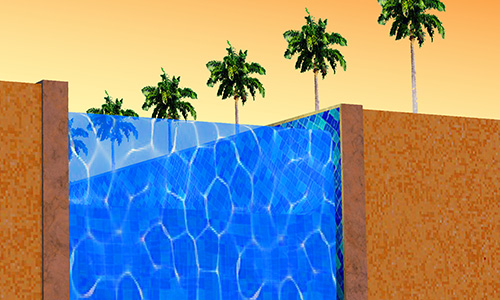 The time has come for Danish post-pop quartet When Saints Go Machine to release their much-anticipated third long-player. Infinity Pool is a highly synthetic effort that sees the band fall further into the rabbit hole of electronica. Almost every strand of sound has a sci-fi twang to it – from the manufactured beats to the robotic tenor of Nikolaj Manuel Vonsild. Where previous cuts like ‘Kelly’ were slathered in radio earworms for easy access, this fresh venture sees them favour the avante-garde, delving into experimental pastures rather than a comfort zone – there are still moments of pop grandeur, but not the kind that Grimmy would play.

They’ve inseminated their brooding, seedy noises with distant genres like ’90s house, trance and hip-hop (just listen to the Killer Mike collaboration, ‘Love And Respect’), creating the kind of genre that would get played in abandoned warehouses on the outskirts of London or strobe-lit basements in NYC. It’s a languid rave, everything pulsing and throbbing exactly at the right moment, but never fast enough to cut shapes to. It’s not for glowsticks. Infinity Pool also nurtures a psychedelic facet, a dimension of the music that’s distorted and woozy, riddled with technicolour hallucinations and dilated time, where concepts of space become a rainbow reality.

‘Infinity Killer’ features Vonsild’s R&B vocals up front, a common motif on the record. There are similarities to The Child of Lov, but where Lov veers towards Southern rap/soul, WSGM sprint towards dance music, and the rhythmic pitter-patter of house. Their sound isn’t identical by any means, but their methods are alike – they’ve both dissected worn styles and screwed them back together in a unique way. ‘Iodine’ is another example, bringing shuffling hip-hop percussion together with the sacresanct screech of organs and strings to create a sort of urban hymn, like a ‘Bittersweet Symphony’ for the Age Of Information.

For all the pop pomp, the LP seems like it embodies the aftermath of a global disaster – there’s stages of unrelenting destruction, moments of isolated clarity and parts where the dust has settled and you can look to the future – in that respect, it’s highly cathartic. There’s a traumatic undercurrent throughout, but even in the darkest corners there’s an element of hope and determination, ensuring that the record doesn’t descend into a dark pit of despair. Infinity Pool is the kind of album that you’d listen to in the eye of a storm; as chaos rages around, you can experience a desolate calm.

‘Mental Shopping Spree’ whips and darts in erratic directions, with polyrhythms dancing in the background and a focal strain of dubstep-infused sound. They tactfully avoid becoming a Skrillex knock-off by merely using the dramatic fizz, rather than migraine wobs. ‘Degeneration’ is also bass-heavy, though far more malnourished in terms of texture – most of the time it’s just one whirring synth and Vonsild’s affected vocals.

Infinity Pool is ridiculously ambitious, but fortunately the gamble pays off. It’s not an album that will leap out and grab your lapels demanding attention, it’s one that’s quite content inside itself, one that will require you to listen closely and tease out the genius. On the surface it’s pretty alienating, perhaps fans won’t agree with the direction they’re taking, but in the long-run When Saints Go Machine will reap the rewards. They prove here that they are masters of all they survey, crafting an anthology of innovative tracks that feature pop streaks. They’ve struck a perfect balance between pushing boundaries and making people dance.