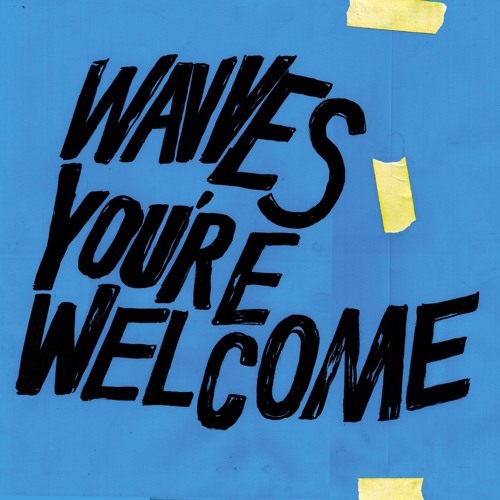 The last Wavves record was well below par, and with the benefit of hindsight, we know have some insight into why.

Ahead of the release of 2015’s V, the Californians signed with Warner Bros. and apparently found the experience a hellish one. Frontman Nathan Williams cited widespread organisational failures as being behind their fallout with the label, as well as more specific post-recording difficulties; the release of the single “Way Too Much” on Soundcloud before Warner Bros. had approved it, and the label's failure to sign off the artwork for the album. In the press notes for this follow-up, Williams does not mince his words, and is also characteristically honest about the reasoning behind signing - a cash advance too good to turn down and his and bassist Stephen Pope’s desire to be wined and dined by majors at some of Los Angeles’ best restaurants.

As the band return with You’re Welcome, they’re now very much back in control of their own destiny, with their Ghost Ramp label that also doubles as a merchandise store for what is, in effect, Williams’ fashion line of the same name. The press notes for You’re Welcome ascribe the title of “self-released, self-actualised, self-promoting punk kingpin” to Williams in the light of this reinvention, which would be a touch easier to take at face value if he didn’t describe himself as an “entrepreneur” not once but twice in the same press release, thus casting himself more as jumped-up The Apprentice candidate than trailblazing bastion of fuck-the-man cool.

Still, there is a palpable sense of purpose and urgency about You’re Welcome that make it the best Wavves record, notwithstanding the collaborative No Hope for Me LP that they put out with Cloud Nothings, since their career standout to date, 2010’s King of the Beach. The primary issue with V was that it meandered stylistically and lacked cohesion as a result; its follow-up, by way of contrast, sounds refreshingly free of behind-the-scenes meddling, and very much an accurate reflection of a singular vision.

Wavves have always been at their best when they’ve focused less on freewheeling punk and more on Williams’ keen ear for hooks and melody, and You’re Welcome is mainly born of the latter, so much so that even the more ambitious tracks really come off - the bouncy-but-wonky “Come to the Valley” being a prime example. The irresistible fizz of “Animal” falls into the same category, as does “Under”, minimal verses exploding into a hoarse-throated, scuzzy chorus.

Elsewhere, though, there’s some real re-treads; the glitchy nature of the guitars on “No Shade” doesn’t cover up the fact that it’s basically Wavves-by-numbers (“I’m by my pool, I’m drinking lemonade / no shade”, whilst “Stupid in Love” would be repetitive even if we hadn’t heard them do it before. “Million Enemies”, meanwhile, would’ve been a stomper at two minutes, but begins to drag at twice that length - after all, four minutes is a lifetime by Wavves’ standards.

Williams has traded on a decidedly bratty persona for much of his career to date and, accordingly, hasn’t always been the easiest guy to warm to. He goes some way to making amends with some of his most endearing lyrics yet on You’re Welcome. His brusque Twitter proclamation last year that Trump supporters were not welcome at his band’s shows was admirable and brave, as is Ghost Ramp’s support of ACLU and Planned Parenthood, and he channels some of that political energy on the furious “Exercise”. Plus, affecting closer “I Love You” might be the first time we’ve seen him properly lower his guard; the outcome is endearing and, like much of this album, holds promise for the future.