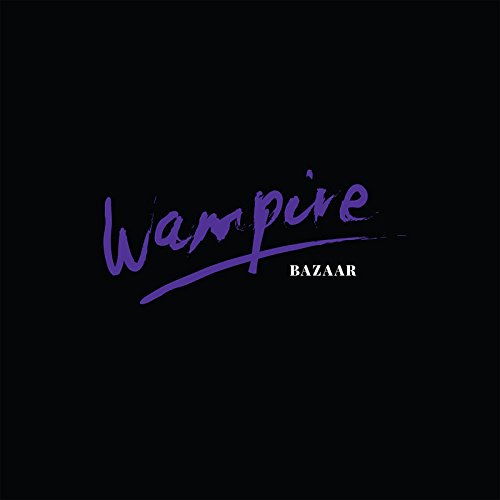 The main charm of Wampire’s 2013 debut Curiosity was how it sounded like it was thrown together in someone’s basement after a 48 hour session watching crummy B-movies and smoking headache inducing homegrown. Using that kind of John Maus/Ariel Pink anti-production lo-fi ethic that sounds like a recently found dust covered cassette, sparkling pop such as “Giants” and “The Hearse“ were dumb bubblegum indie pop indebted to The Archies with the one chord aggression of Joey, Dee and the band.

This swift follow up has the duo expanding to a five piece and cutting the schlocky aspects that made them so appealing, the schlock has been replaced with sax - loads of sax.  It's a move which on the whole works.

Lead track “The Amazing Heart Attack” is misleading as an opener as it's a continuation of the vibe of the previous album; silly sounding, bummed out fun. Its jagged guitars and '80s synths are OTT, camp, urgent and catchy as hell, and it's the only track here like this, making the ears beg for more. "Bad Attitude" is a continuation of what The Hives have been peddling for years and “Fly On The Wall” revisits the time in the last decade when loads of indie bands copied that Dr. Dre one note piano line - but with added sax. They’re... OK tracks.

Bazaar operates best when they slow the pace. “Wizard Staff” comes across as RnB transported to San Francisco and “Too Stoned”, undoubtedly a highlight, is full of Pink Floyd pomp and ridiculous Clapton-esque riffiing - two of its four minutes is build up via dramatic piano and Heroes-era Bowie sax wails, but the main part of the track just ends, sounding like it could do with an extra four minutes to back up the epic intro.

“Millennials” is the go to track here. With woozy reverb, vocal pitched up a notch aping female singers, honky tonk pianos and 80s synths, it's the most psychedelic track here and shows MGMT how to do MGMT stuff. Elsewhere, “Sticking Out” is snotty punk, “Life of Luxury” does that Pavement-goes-country stuff pretty well, and the closer is tentative, vague and electronica tinged.

Bazaar achieves what it goes out to do well, but could do with a few more of the mind-benders they are fully capable of achieving. Next time.