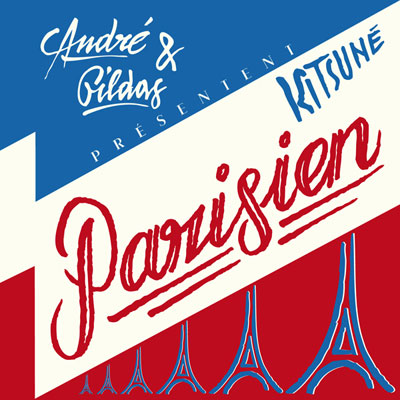 I’ll be completely honest about this one. The first time I listened to Kitsuné Parisien, the latest of the Kitsuné Maison compilations, I didn’t like it. I thought it was a poor cross section of the flourishing French electro scene, a collection which left me feeling heavy-hearted and a little cheated. My first listen was whilst making the daily, February-grey, hazy journey to work, and these colourful French creations weren’t doing anything to brighten my mood. The obligatory second listen however, took place on a clear day, sun streaming through the thinning winter mist, vitamin D seeping into my skin, with some people in the vicinity even sporting sunglasses! In February! And all of a sudden, this album began to make a lot more sense.

Before becoming known as the record label Kitsuné Maison (interesting fact alert), the brand started out as a rather pricey clothes shop. Today, Kitsuné continues to stock the ‘néo- classique’ (dowdy and expensive) garments that are arguably more suited to the parents of the music label’s fans than to the fans themselves. There’s nothing dowdy about this collection however, Kitsuné Parisien, put together by label founder Gildas Loaëc is a party record, showcasing some of the newest and best electro outfits that the label and the city of Paris currently have to offer.

The stand-out track of this collection would have to be ‘Saké’ by Jupiter, a fairly light but incredibly catchy dance track, uniting the better parts of European pop music and some of the consuming nature of the music of Daft Punk (it couldn’t be avoided, a review of a French electro compilation will inevitably involve a mention of the helmeted Edbangers at some point). There’s a simple story to the song, it’s about going out and drinking Saké – no need to complicate it any further, just ply it over the top of some pounding processed beats, disco synths, and electronic bliss is mastered.

‘Hello.jpg’ from Logo starts out as an annoyingly Nintendo-esque, beeping crescendo which eventually turns into a surprisingly tender, great piece of electro. Other stand out tracks on the album include the lilting, French-tinted English vocals of Birkii on ‘Shade of Doubt’ whereas with Beataucue’s ‘Behold’, we’re led a bit closer to the pounding rhythms and circular synths that one would easily attribute to traditional French house music.

Valley had definitely been listening to Foals around the time of coming up with their contribution, 1999, the singular guitar notes and collective chanting having almost been directly lifted from the Oxford band’s back catalogue. That’s not to say it’s a bad tune though, far from it, it’s a perfectly enjoyable party track, but it does feel a little bit ripped off. And there are, as with any compilation, some blips – ‘Adélaide’ from the hands of Destin could most certainly have been omitted, and Yan Wagner’s ‘Recession Song’ isn’t the best example of his work by any means.

It’s not all bang bang beep with this collection however, there are the hauntingly poignant vocals of Cascadeur to be found, along with the great track, ‘Glory’ by Sauvage, both of which serve as refreshers in between the faster paced records.

Kitsuné Parisien is a nice presentation of where Kitsuné is today, and an insightful peek into the underground dance sounds coming out of dimly lit Parisian basements as well as the thriving club scene. As with all of their compilations, this serves as a great way of finding out what’s going on over the Channel, compacted into a nicely structured, blue, white and red package.