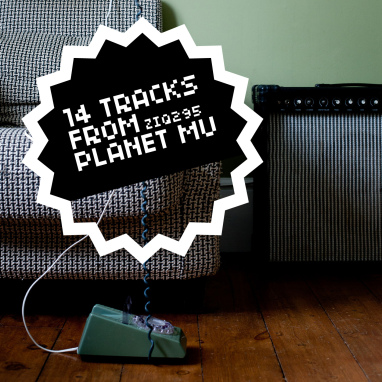 Planet Mu founder Mike Paradinas (also known as u-Ziq) has progressively evolved his imprint from its intelligent electronica birth to one straddling between hemispheres at the forefront of bass music. Following the intriguing milestone release of Bangs & Works Vol.1 late last year, 14 Tracks From Planet Mu is a meticulous compilation that showcases fresh material and impending releases in 2011.

What do Paradinas and the three wise men have in common? They cometh from afar and both bestow rich treasures, and in the former’s case he presents a healthy genre glut via techno, post – dubstep, grime, hip hop and house to name a few. On the ones and twos for ’Solar’ is Catalan born, Cambridge producer Oriol with the first exclusive drawn out of the proverbial sack. Cosmic, dream like synths; Warped strings; and a shifting kick pattern are in good health further enhanced by the perpetual chipmunk reverb. Chilled house fused with the finer points of Parliament and James era funk, Oriol merges nostalgia, the present and future with relative ease.

The Tarkovsky- inspired Hipster darlings Solar Bears resume their minimalist and ambient theme from acclaimed debut LP She Was Coloured In on fresh delight ‘To Be With Her’ Alarm-like soundscapes make way for the coming of a thudding MPC which liberates a measured drum loop pattern similar to Gorillaz’ Kids with Guns. It steadily erupts the ear passage in tandem with an accord of strings; broken bells; and bass that fittingly captures a morose male’s affliction for the one that got away.

‘Ufonik’ by Barry Lynn aka Boxcutter is a special preview on the collection, with the track taken from the forthcoming follow-up LP to Arecibo Message and the Planet Mu veteran further illustrates his sacrosanct musical inventory. The soulful choral charm of past collaborator Brian Greene over G-funk inspired pitch-bending synths; faint bass guitar; and arpeggiated progressions combine to construct a smooth baby making groove (forgive my inner Barry White).

Swindle is an upcoming producer of the grime variety having worked with Terror Danjah amongst others in the underground scene and is certainly one to watch in 2011. ‘Airmiles’ showcases his versatile and carefree manufacture of Future Funk and Grime to “dun the dance”. Harry Belafonte bongos in close alliance with sinuous strings provide an air of calm, before the energetic syncopated storm envisages memories of mass skanking in the rave (a la British Bulldog) provoked by Lethal B’s Forward Riddim.

South London producer and DJ duo Rossi B and Luca are renowned vanguards of the UK funky, grime and dubstep panorama, thus ‘E10 Riddim’ is further testimony of their sweat inducing discography. Harsh military snare drum sequences are interspersed with slight steelpan to compliment an unhealthy tide of subbass pressure and sirens courtesy of the Met post- Notting Hill.

14 Tracks From Planet Mu relays it’s precise and bold qualities for all to listen, and your musical palette is instantly rewarded. You’d be hard pressed to find a record label that comprehends the current and forthcoming trends in a flexible fashion like Planet Mu. If your looking for wobble, please, jog on.