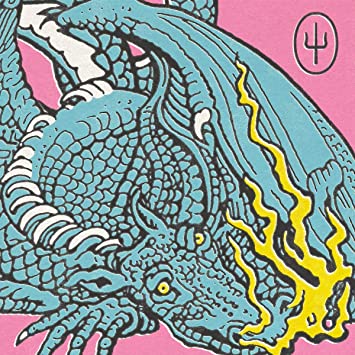 There’s a tangible swing in Twenty One Pilot’s step on the follow up to 2018’s ascension continuing Trench.

Where previously the duo, vocalist and multi-instrumentalist Tyler Joseph and drummer Josh Dun, relied on packing a punch with immersive worlds, cinematic soundscapes and rapid-fire vocals Scaled And Icy instead opts to blow the murky clouds away, exploring a TOP world unlike any other before.

Being written, recorded and produced remotely, this facet makes itself abundantly clear. There’s a disjoint to the album that does indeed feel more akin to a bedroom world, but this all lends itself to the subject matter dealing with the nefarious isolation and anxiety magnified by the world’s current state.

If you’re going by the lore that surrounds TOP and their existence (Trench involved a bunch of priests and a world called Dema), then this album is the one where evil capitalism wins and propaganda of the most pop variety reigns supreme - hence the jump-heel-click atmosphere. But if you’re a casual listener, this is an album of approachable pop that exists solely for a revered rock group to expand themselves beyond the expectation of even their most diehard fans.

The bouncing, piano-led opener “Good Day” certainly feels like the sunshine breaking through the clouds, but in classic pop fashion, there’s more than meets the eye. A tale of losing wives, and the world crashing down around you, frontman Tyler Joseph does his best to convince you it’s a good day, and with the musical upswing it’s hard to not believe him.

Are there generic sounds here? Sure, but why do we need to be faced with complex, nuanced music to distil deep human emotions when the pop basics of a sweet melody do the job so much better. “Formidable” is a looping saccharine dose of radio rock pop ode to love, “Saturday” is a venerable TOP party anthem, while the touches upon TOP of old in “Shy Away”, similar to “The Outside” (albeit in a more languid approach), keeping one foot in the retrospective door.

Occasionally taking things too far, “Bounce Man” feels a bit too sickly sweet in its continuation of “Good Day”’s hop-skip-and-jump approach. Inevitably placing everything before it in a new context, much like stuffing your face with numerous desserts you look back and wonder “why?”

“No Chances” circles back to those huge industrial sounds of old. Feeling like the thunderclaps are creeping back in along with “Redecorate” acting more as a threat to follow out its titular lead and immediately pop the ragged sheets up ready for TOP to completely reinvent themselves once more.

But this is the thing with a band like TOP. They tend to follow their whim’s to the ends of the earth, be that to approach the mainstream cautiously before retreating and circling back for one more tentative check. This is an album that steps out of the shadow of fandom and instead invites the world in.

No matter your view, Scaled And Icy is Twenty One Pilot’s at their most fun, and while it’s not a home run, as a society it’s a time for exploration and change, and the duo have pasted the pastel colours on heavy ready for when the sunshine decides to grace us with its presence.