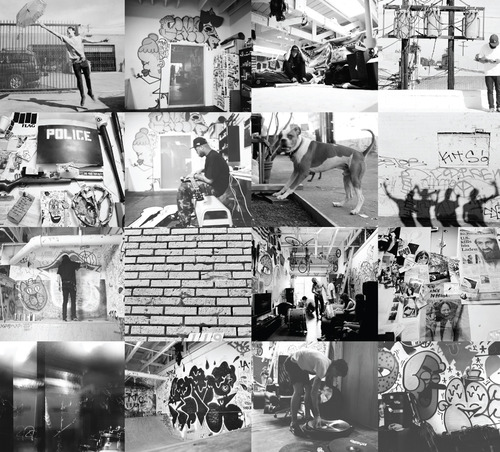 In May, Sacramento-based hardcore band Trash Talk signed with Odd Future Records as the first band not associated with Tyler the Creator’s hip-hop collective on the label. They’re also the only rock band on a rap and R’n’B based label, but the signing still made immediate sense on a couple of levels. Trash Talk share Odd Future’s angry, anti-authoritarian message and their white, teenage boy audience. The chaotic, destructive energy of an Odd Future show would fit any hardcore show. After listening to Trash Talk’s first release on their new label, 119, I hear another connection. Hardcore, like rap, largely abandons melody and leaves the singer with only a couple tools at his disposal: passion and rhythm. You know going in that 119 is going to be a savagely ferocious album with unrelenting kick-you-in-the-teeth intensity, but the album stays engaging because of the band’s effortless dynamism in mixing metal and punk sounds and guitarist Garrett Stevenson’s memorable riffs.

On ‘Blossom & Burn,’ Trash Talk and Odd Future make the hardcore/rap connection and meld their respective genres to good results. Because Trash Talk stay just as strong when they slow things down to an evil, metal crawl, they’re able to provide a surprisingly rappable beat. Hodgy Beats, sounding almost nothing like himself, shouts an effective verse before Tyler the Creator comes in to spit a few bars. Tyler’s deep, gravelly voice is strong enough to cut through the roar without shouting and, unlike Lil Wayne’s or Andre 3000’s or even Lil B’s lame stabs at rock, this may actually suggest a viable direction for him. Elsewhere, 119 is at its strongest when the riffs are at their most distinctive. Lead single ‘F.E.B.N.’ layers a dirty, relentless guitar line on top of a propulsive drumbeat while Lee Spielman screams “Onward, upward!”. The big, awesome riff on ‘Reasons’ wouldn’t sound out of place on In Utero if it weren’t for Spielman’s hoarse-voiced screaming. ‘My Rules’ is anchored by a spine-tingling breakdown with bassist/vocalist Spencer Pollard shouting about “the hate in this world”. With 14 songs in 22 minutes, some of the album rushes by without making as much of an impression, but even at their least distinctive, Trash Talk never let off the gas or sounds like they are repeating themselves.

Trash Talk are, along with Fucked Up and OFF!, one of the few hardcore bands that indie audiences or, for that matter, anyone outside of hardcore’s insular audience, listen to. But Fucked Up’s avant garde touches make them no ordinary hardcore band and OFF! are largely a retro act from a different period of punk; Trash Talk are really the only band to break through to a wider audience while playing typical, 2012-style hardcore. That success started with their relentless touring and their insanely fun, insanely intense, legendary live shows. 119 proves they can do it on record, too.