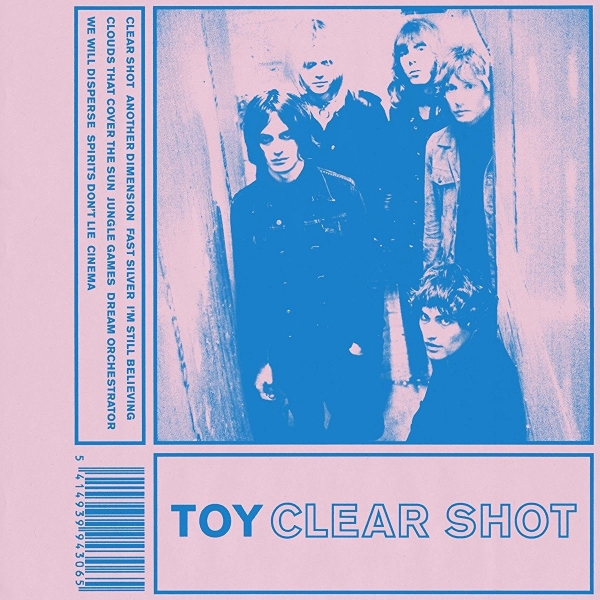 When a relatively new band goes quiet after an initial flurry of activity, to then announce a producer and line up change, it’s perfectly acceptable for alarm bells to ring.

Since TOY’s excellent second LP Join The Dots back in 2013, they've lost Korg synth mistress Alejandra Diez, an absolutely key component of their sound. In addition, the expert wooshy noises of production wiz Dan Carey, whose bag of tricks is so well suited to the band, has been replaced behind the boards by David Wrench.

With Diez being swapped for Max Oscarnold, they've lost a sound which made TOY stand above many of their peers. Those weird wiggles and freakbeat atmospherics have been replaced with a more direct synth sound played in the same manner as a guitar, perhaps unsurprising seeing as Diez's replacement is also the guitarist in The Proper Ornaments.

Influences on this third album are disparate; books on the pre-folk music scene, the sound experiments of Radiophonic Workshop and COUM transmissions, and the music of Ennio Morricone and John Barry. None of this really manifests itself in the record, but there is a new cinematic sheen to their sound, a new openness, something previously repressed by Carey's airless production.

Whereas previous LPs were immediate and easy to fall to their charms: the tremendous krautgaze grind of "Dead and Gone" from their debut, "Too Far Gone to Know"'s progtronics from the follow up, for example, Clear Shot takes a little more effort. The dreamy opening title track, and the sinister nervousness of "Fast Silver" are the clearest indicators of them falling under the influence of cinema - it's musical film noir, the claustrophobia of Tim Pope videos of The Cure, remixed by the murkiest of Joe Meek productions. These are the album's highlights, the nearest Clear Shot gets to the jagged guitar sounds which were synonymous with the band on their previous two works, and especially live.

Although "I'm Still Believing" has the kind of driving beat and key work which immediately make it recognizable as a TOY track, albeit one which screams its Felt influences out, elsewhere you're hard pushed to find anything that really sticks out. There are no psychedelic freak outs such as "Join The Dots", no blistering moments of shoegaze noise such as "Kopter", nothing as warm and otherworldy as "Left To Wander". The hushed lullaby qualities of "Clouds That Cover The Sun" is a pleasant moment which shows off their new found ability for vocal harmonising, the Byrdsian chiming guitar sounds of "Jungle Games" continues the monochrome atmospherics of the title track well, and the arpeggiated stabs of "Dream Orchestrator" gives the album a welcome jolt of jittery urgency.

There's nothing particularly wrong with Clear Shot. It's a perfectly acceptable album, only it sounds like they're holding back a little - this is a band who have previously begun LPs with eight minute instrumental electronic excursions and released nine minute pop tracks laced with feedback. Obviously a band doesn't enter a studio with the intention to make something unambitious, but by improving the jangle aspect of their sound, they've scrimped on the other sonic tricks that made them stand out from the rest.