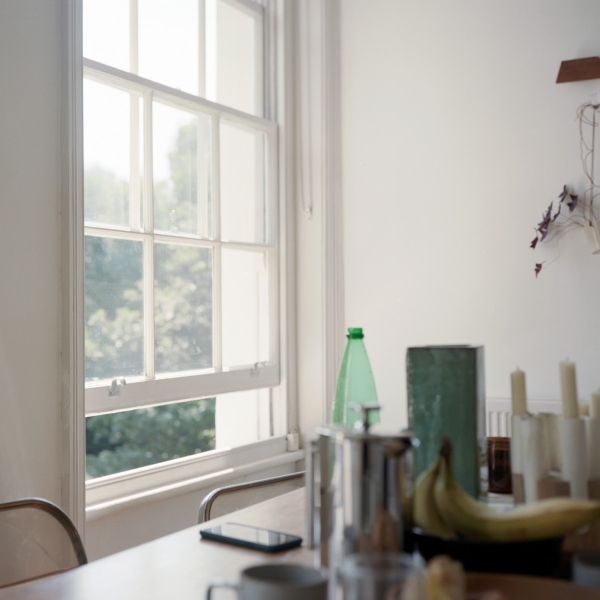 Tourist’s sophomore follows an adventurous but melancholic debut, the ending of a four-year relationship and a Grammy award for co-writing a Sam Smith song. He’s got married since then, and seems to be happy now, but less of that.

Where his first solo record collated a vast expanse of field recordings in an expertly crafted piece of electronica, Everyday has traded inquisitiveness for a more self-contained portrait. You can see Nigel Shafran’s photograph on the album cover, depicting a dark wood dining table, an old iPhone, a slightly opened window, a litre bottle of fizzy water and some ready-to-eat bananas. It’s a perfect blend of South London hedonism meets nice crockery and a steady income from the job he loves.

As album opener "Awake" warbles through a slow build, swilling electronics become an atmospheric palette cleanser that you don’t want to end. The song cycle of woozy eye opening and welcoming the day is cognizant of King Creosote’s initial collaborations with Jon Hopkins on "First Watch". The build climbs through to "Emily" into one of the most anthemic dancefloor singles since George Fitzgerald’s ‘Burns’.

What starts as a comfortable listen still has its moments of experimentations and uncertainty that made 2016’s U such an interesting listen. It’s better crafted and less sample-reliant too, and there’s a twitch of awkwardness in his awareness of self-presentation. Minor chords interrupt a gentle acoustic guitar strum in "Someone Else", undulating and syncopated keys in "Pieces| fall uncomfortably offbeat, the neck of ‘Apollo’ is elongated into what’s almost an ambient track before being hit by another dancefloor hook.

You’d be forgiven to think Everyday is a sponsored Valentine’s Day collection – its morning-after release date, its tracklist filled with women's names, "Love Theme", "Hearts" and "Affection". But as far as digitised portrayals of routine and mundanity go, Tourist’s approach has a gravitas and honesty free from pretence. You can feel last night’s hangover and the morning’s comfort in digital compositions that are deft with subtlety and bursting with life. And there’s no deception of the boredom in the middle.