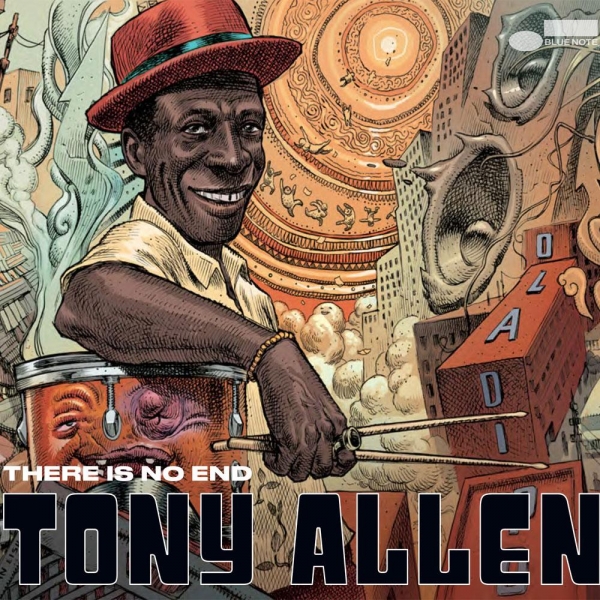 Tony Allen. To some, he’s the man that carried Fela Kuti’s revolutionary groove for just over a decade, from the late ‘60s to the late ‘70s; the co-founder of Afrobeat, and the musical director of Kuti’s Africa ’70, one of the most influential - and greatest - bands ever.

To others, Allen is known for being the rhythmic backbone of Damon Albarn’s art-rock supergroup The Good, The Bad & The Queen. No matter with whom he was involved with musically – and there’s myriad other names that can be mentioned – Allen was known for his effortless command of the drum kit, able to tailor his playing to virtually any genre without compromising on any of his style.

There Is No End is the great drummer’s final release after sadly passing away last year, and he wanted the album to act as a backdrop for a younger generation of rappers, to give their voices a platform. While none of them actually got to record with Allen, the grooves he’d already laid down with producer Vincent Taeger were so full of life and energy that it was as if he was in fact in the room with every name involved.

Boasting an exhilaratingly omnivorous sound, the result of an international roster of rappers that have been recruited for the project, it's all tied together through Allen’s insatiable appetite for musical exploration. “Stumbling Down” is a slow lurch of a track, featuring Zambian-Australian Sampa The Great and her quick-fire spray. Detroit-emcee Zelooperz’ Midwest slur and hyperactive synths play off each other with infectiously head-bobbing results on “Coonta Kinte”. “Cosmosis”, a psychedelic trip of a track, and a standout moment of the album, features Ben Okri’s towering spoken-word and spitting from grime legend Skepta, while the Danny Brown-assisted “Deer In Headlights” – another album highlight – stutters along as the Detroit native sneers in his distinctive high-pitched tone. It’s all underpinned by Allen’s drumming, which is impeccable throughout, at times crisp and sharp, at others fluid and smooth, full of lively flourishes and masterful finesse.

“We just have to explore.” That’s the last phrase you hear on this record, on a soundbyte of Allen talking about music. If it’s one thing There Is No End does, it’s explore – but it does so much more. It inspires. It transcends. It moves. It redefines. It shows you what music that knows no bounds can sound like.