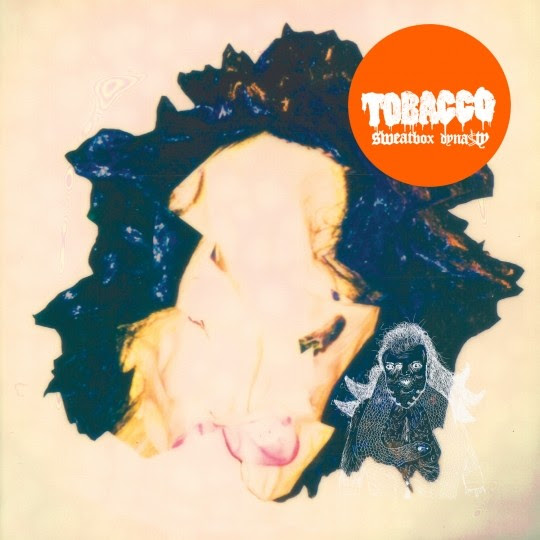 Underneath the sticky throb and ambiguous menace of Tobacco’s pulverized electronic chops there is an ascetic aversion to indulgence. Time and repetition is, as always, at a premium, and the spasms and undulations of Sweatbox Dynasty happen under a watchful eye.

Titles like “Human Om”, “Gods in Heat” and “Dimensional Hum” could allude to the notion that Sweatbox Dynasty is a subversive spin on a spiritual awakening. The grindhouse vibe and imagery at play in previous Tobacco albums Maniac Meat and Ultima II Massage have eased up. “Warlock Mary” and “Suck Viper” offer spacious respites even in their close confines, with slow-stutter beats kicking back on temperate synths pitch-shifted whispers. There are unexpected streams of tranquility that wind amid the jagged shards.

The saturated psychedelic free association of Black Moth Super Rainbow, Tobacco man Thomas Fec’s longtime ensemble, always lurks in the shadows of his solo records. Both have exhibited an uneasy relationship with accessibility. On Maniac Meat, notably, Tobacco took not just one but two guest vocal turns from Beck and tossed them in the juicer, extracting the nutritious art damage while pulping the wider commercial potential. Cross-pollinating experiments are still a greater overall concern than making sure to repeat the hooks, but the aforementioned “Gods in Heat” and “Human Om” might be Tobacco’s most obliging pop concessions to date.

The backstory here is that the making of Sweatbox Dynasty was preceded by a discontented creative pause that only let up once that pause was accepted. Though the album isn’t an entreaty for mass acceptance, Tobacco’s music does sound increasingly comfortable in its stitched-up skin.