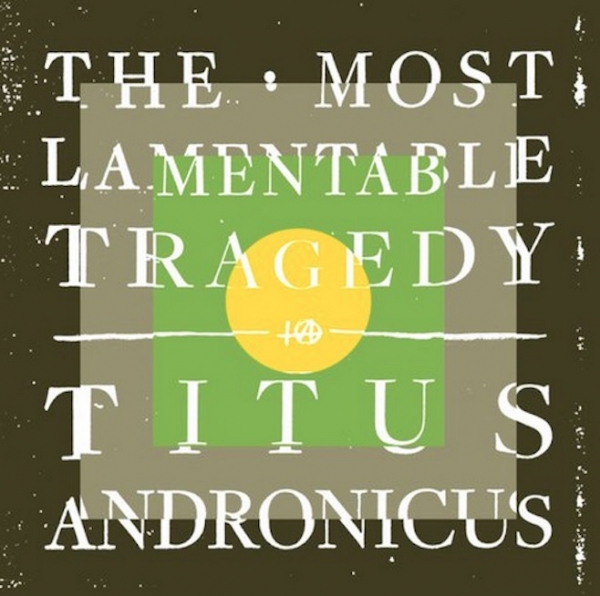 Over the last couple months, Patrick Stickles hasn’t made the task of reviewing the fourth Titus Andronicus album, The Most Lamentable Tragedy, easy. This is not just because of the album’s sheer length - 93 minutes. Nor is it because of its pretensions - it is, as you probably know by now, a five-act rock opera. Besides, as a good friend of mine put it recently, “it’s only pretentious if you’re pretending,” and Stickles is as 4 Real as they come.

No, TMLT is a bitch to review because almost every element of it has been explained, in copious detail, by its writer already.

This seems to be for a few reasons: he's afraid of its nuances being misunderstood, citing the response to Fucked Up's David Comes to Life as a particularly galling example. He's upset by the reaction to the third Titus album, 2012's Local Business, which was reviewed coolly by a music press eager for a sprawling behemoth masterwork. You know, like the second Titus album, the Civil War-themed double LP The Monitor.

So Stickles has left nothing to chance fourth time around: there's a self-annotated Genius page with the album's complete lyrics, a Twitter trending topic for the curious listener (#talkaboutTMLT), and spoilers all manner of easter eggs around the album's arcane use of numerology and cultural references (both high and low).

Simply put, TMLT is not for the faint of heart.

So what does the album sound like? Jesus, where to begin? It's the punk rock equivalent of Monty Python's Mr. Creosote, shortly before being presented with the wafer thin mint. This being Titus Andronicus, the wheel is not exactly being reinvented for guitar music. Rather, the wheel is being put to the best use in a very long time. There's minute-long hardcore blasts, an acapella hymnal, straight-up power pop, overwrought piano balladry and one almost terrifyingly accurate Daniel Johnston homage ("Stable Boy", that is, not the Daniel Johnston cover, which appears earlier), which may be the last song Titus Andronicus ever release - more on which later.

The sequencing seems to weigh the more straightforward rock songs towards the first half - "Lonely Boy" sounds like all four sides of Exile on Main Street being played at once. "I Lost My Mind" (the Titus song, not the Daniel Johnston cover, which appears later) re-imagines Springsteen's "Badlands" as a home for the mentally unstable, with inmates forming a house band.

The opera's second act, incidentally, is the most galvanizing fifteen minutes of rock and roll you're likely to hear this decade. Look. Now tell me I'm wrong.

Then the more abstract material kicks in, seemingly mir...

Nope, this isn't working for me. Let's try it this way instead.

Merge founder Laura Ballance has said that it took Stickles about as long as the album itself to explain its plot (whiteboards were apparently involved). I won't do anything like that here; suffice to say there is a depressive hero, his self-created manic doppelganger, dream sequences set in 1900's Ireland and, of course, a love interest. Outside of the plot itself, there are explorations into the evils of psychopharmacology, organised religion and the stigma of mental health within families and relationships. Why would anyone have a hard time getting to grips with that?

The most astonishing thing about the album is how Stickles manages to tailor the songs to their place in the narrative. As the Hero becomes more crazed, giving in to his manic impulses, so the pace picks up. As the Lookalike takes over the narrative, Stickles spews the lyrics out with rabid fury, and the words themselves become more dextrously deranged - peaking with "Dimed Out"'s relentless tourettic torrent, which boasts wordplay so intricate there's even a joke hidden one line's grammar.

When his emotions crash, so does the record's pace - the nine-minute "More Perfect Union" marks the first of the dream sequences with a Gaelic dirge, as if The Monitor had been recorded by an actual Civil War military band. As he composes himself again (appropriately enough after the mantralike lyric “I can control something inside of me”), the music sweetens up for one last stretch. The romantic tracks - part of another dream sequence, natch - keep up the Eires and graces; "Come On, Siobhán" is the best song Kevin Rowland never wrote, and the cover of "A Pair of Brown Eyes" gleefully takes a chainsaw to one of The Pogues' most cherished songs. With the Hero left naked, scared and alone at the album's end, the guitars disappear, replaced by piano and chord organ

Stickles, incidentally, is not Titus Andronicus all by himself. There is a band behind him. An insanely talented, versatile bunch, on hand to provide killer solos (and, in the case of guitarist Adam Reich, co-production), sturdy backbeats and flailing fills. Owen Pallett even stops by to provide string arrangements.

The album has many callbacks as an average episode of Arrested Development, some more obvious than others. There is no way anyone not in Titus Andronicus would have any idea that "Stable Boy" was recorded on the same 4-track as the intro to the first track on the first Titus Andronicus album, for example. But references to earlier material abound, from small lyrical fragments, reprises of older songs, and the fourth and fifth chapters of the “No Future” series. A Seinfeld reference graced the title of the band’s first album, and another provides the crux of one of TMLT’s best lyrics (from “Lonely Boy”, in case you were wondering), one which I may or may not have spent at least one sleepless night attempting to unpack.

Simply put, it’s easy to find oneself getting a little carried away with TMLT.

But, I mean, of course there’s stuff wrong with the album. Are the interludes and silent tracks necessary for the listener? Fuck no. But for the sake of the album? Patrick Stickles seems to think so. Some tracks are overdone – the droning “Funny Feeling” gets completely lost in the shuffle between the relentless Trail of Dead-style symphonics of “(S)HE SAID/(S)HE SAID” and the poppier “Fatal Flaw”. Hell, I struggle to recall some entire tracks from this thing shortly after listening to them.

In fact, everything about TMLT screams TOO MUCH (no shit). On paper, none of this should make sense, let alone work. This Stickles guy sounds like the worst kind of self-righteous heart-on-sleeve punk rocker, right?

Titus Andronicus aren't here to save punk rock, because their frontman can barely save himself. But (aside from Drive-By Truckers circa 2001), what other band is coming out with material this self-lacerating or far-reaching, and having the songs to back it up? Of course The Most Lamentable Tragedy is ridiculous. It's also dumb, intelligent, heartbreaking and life-affirming. If Patrick Stickles' aim was to capture the experience of his own manic depression as accurately as possible, it was never going to be concise, much less easily comprehensible without some kind of Titus Andronicus-sponsored SparkNotes.

And who thought Patrick Stickles would actually deliver on the jokey-sounding promise he made in an interview with a local paper some three years ago to make a five-act rock opera about manic depression? Well, probably no one. His latest proclaimation has been that this album will mark the end of Titus Andronicus's existence. He sounds a lot more serious about this one, that's for sure. If he delivers on that promise, then at least they can disband in the comfort that they've left behind the most formidable discography of any punk rock band currently making records.

As for TMLT, you may not find yourself prepared to listen to all 93-minutes of it all that often, and I can't blame you -, it would be like watching Apocalypse Now! twice a day, but with fewer interminable Doors songs. But even the smallest exposure to the album - be it a quick blast of "Dimed Out", "Come On, Siobhán" dropped onto a Spotify playlist for someone you like, "like" like, or a dark night of the soul soundtracked by "No Future V: In Endless Dreaming" on repeat - may just have some lasting impact on you. It isn't how you're supposed to hear The Most Lamentable Tragedy, but at least you know the whole thing is there when you really need it. And, if there's one thing to take away from this review, you really need this album.