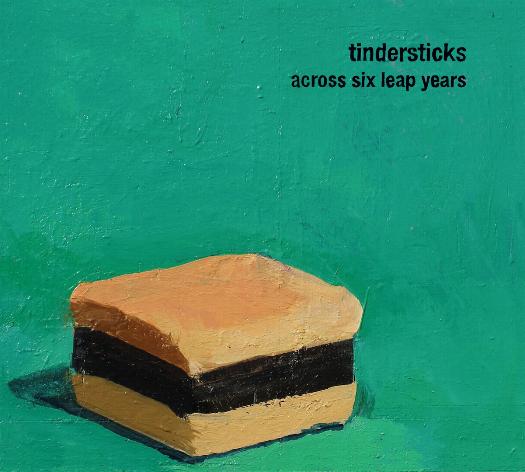 If it’s an ingenious way of marking 21 years of Tindersticks, and for that matter ten studio albums, rather than just whatever passes in their sphere as a greatest hits compilation, Across Six Leap Years might as well on first glance have ‘FANS ONLY’ stamped right across the mastertape. Even then it might backfire, given being a fan of the Nottingham-originating late night orchestral torch song/lounge soul collective involves being quite the collector anyway, so they’re most likely to already know the assorted soundtrack albums, out-takes and solo side projects that the originals of the back catalogue songs re-recorded here come from.

In fairness seven of the ten tracks date from after the band’s initial dissolution in 2005, only half of the original line-up still around, and the reconstituted Tindersticks are on quite a roll at the moment, quiet highlight of last year The Something Rain sketching out a looser, more confident identity more capable of rolling between beauteousness and reflexive individuality. It helps that Staples’ infamous ragged baritone croon, formerly compared to Mark Lanegan and Scott Walker by the converted or Vic Reeves’ pub singer by the wary, has become greater infused with tremulous, reaching towards soulful emotiveness even as the crooner element is toned down.

Opening the album with ‘Friday Night’ and ‘Marseilles Sunshine’, both revisited from his solo debut Lucky Dog Recordings, seems a bold decision given neither boast the extensive arrangements more familiar to the band’s past, the former only backed by pulses and keyboard drone eventually joined by what seems to be synthesised vibraphone, but both carry depths of mild impending peril amid film noir atmospherics as much from the bruised delicacy of Staples’ late night thoughts as the backdrop. Reworking the old material into something more spooked while still intimate might have brought some interesting results, but as it is the bulk of the album cleaves pretty much to the original chord changes and orchestral charts.

As such, playing a pat comparison game between versions of the tracks from proper Tindersticks albums brings mixed results. Sometimes, as with the 1995 second eponymous album’s ‘A Night In’, the difference seems more in the greater fidelity using Abbey Road to record in might bring, while in contrast the same album’s shuddering sad slowcore of ‘Sleepy Song’ emerges from its previous somnambulance and its sudden explosion into life is projected with greater ferocity amid horn fanfares and crashing cymbals for a few seconds before disappearing suddenly into the dark. The cover of their cover of Odyssey’s ‘If You’re Looking For A Way Out’, originally attempted on 1999′s Simple Pleasures, is tighter and more indebted to Philly soul but simultaneously more uptight and much less languid, while the same album’s ‘I Know That Loving’ achieves the soul depth the original recording strives for but can’t quite reach yet; ‘Dying Slowly’, dating from a couple of years later, has had a layer stripped from its strength in adversity, losing something of the resignation that was key to the original.

The most recent song re-evaluated here, ‘What Are You Fighting For? (previously a tour and Record Store Day-only 7″ from 2008), is the last on the album and summarises both the album’s strength and its inherent problem – it’s an understated, insistent swoon about the fear of moving on with life, but to discern any differences from the original recording would end up chasing circles around mixes and sharpness. On that front it’s not much more advanced than that Squeeze album for which they re-recorded their greatest hits and challenged listeners to tell the differences between the recordings, and taken as a ‘new’ complete album it could do with stretching out a little and lighting the occasional fire under the occasionally maintained for a touch too long strolling pace, but it works absolutely fine as a way of shining new light on often overlooked but clearly internally beloved outposts of their two decade career of rainy nights and velvet-lined plush bars at last orders.