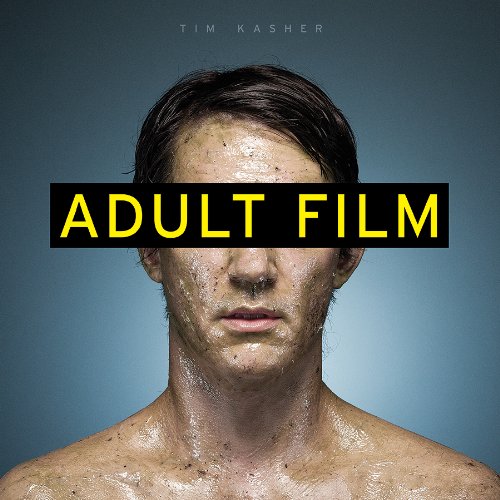 Tim Kasher needs no one else. At least for the batch of songs he calls Adult Film.

The latest solo release from the 39-year-old songwriter is his second go-around under his own name. When an artist steps out under a new umbrella, the songs are always to blame. For Kasher, he’s done this before. Thirteen years ago, when a group of songs didn’t mesh with the familiar pace of his primary band Cursive, Kasher formed The Good Life. Ten years later, he did the same as he stepped out as a solo act for The Game of Monogamy.

Kasher is now back again with a set list in need of no one else, but the self(ish) label is a bit of a misnomer. After all, the solo turn depicts sparse images of an artist alone with his thoughts. Kasher is disinterested in such settings. He is, after all, in a rock and roll band, and Kasher is a rock and roll musician.

In fact, Kasher is not even alone on this. If anything it’s the Tim Kasher band, filled with the familiar faces that backed him for tours for The Game of Monogamy. Sara Bertuldo, Patrick Newbery and Dylan Ryan round out the playing field with pinch hits from notable guests like Laura Stevenson. It’s yet another band for Kasher to front; maybe he’s just tired of the naming process.

Kasher is perhaps straightforwardly autobiographical here. Lead track ‘American Lit’ sets the lyrical pace for the album – and like any Kasher affair, it’s the lyrics that always dictate the pace: ‘I’ve got a story to tell … It’s about a boy with stars in his eyes, or maybe just a man whose dreams were never realized/Whichever it is, it’s essential I get it just right.” Later he warns, “My point of view must be heard/I’ll set my soapbox on a mountaintop and bark out every word.” With clear enunciation and subservient rock structures, Kasher’s perspective(s) are the bread and butter of Adult Film.

As he nears the age of 40, Kasher clearly wrestles with some mid-life demons on Adult Film. Some are rather obvious, other demons linger around corners. But it’s hard to miss the one-two punch of “Truly Freaking Out” and “Where’s Your Heart Lie”. The former takes a surprising turn atop a pulsing synth, but even artificial structures submit to Kasher’s missives on mortality: “I know, I know, I know the end is near/And I know, I know it’s all downhill from here.” The latter burns slowly, a candle dripping with self-loathing. Kasher sings, “What’s your heart think/Think about you and me?/Does it blame you for settling?” A few lines later, Kasher asks, “Goddamn, what’s wrong with me?”

The presence of the powerful couplet on the front end opens wide the doors for introspection, doubt and tinges of hope through the rest of Adult Film. “Life and Limbo” is a staccato ‘80s-influenced rock tune with nods to Beck. All the while, Kasher sings of consumption, debt and desire. “A Looping Distress Signal” urges the subject (or listener) to push ahead through the ills that plague, a sign of hope alongside the recognition of danger and doubt.

“A Lullaby, Sort Of” is just that, a lilting tune that jars with autobiographical tales of cancer in Kasher’s family. It ends the album with the refrain, “The world’s a scary place/It’s best not to know what’s under the bed.” It’s a final reminder from Kasher that Adult-hood is a scary journey, one in which innocence is lost, hope fades and confusion abounds. Yet within that, he’s also a signpost for what matters most. Authenticity and honesty are the hallmarks here of a painful and unsettled rock record. It’s not hard to figure out why his own name was the ideal stage to sing from.