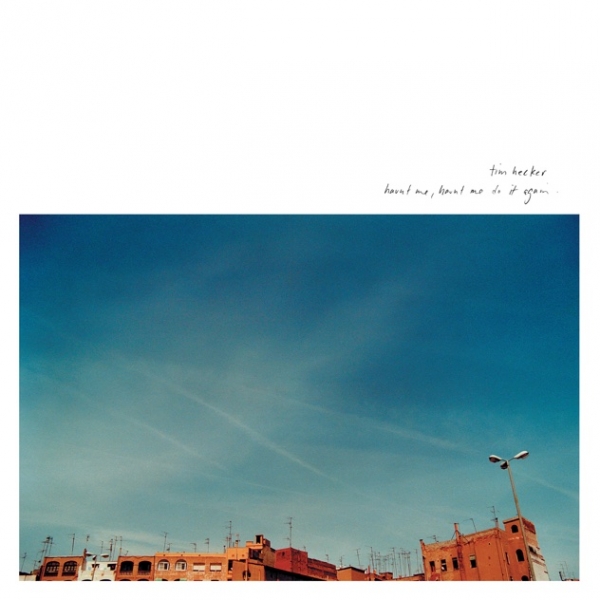 Experimental noise maverick, Tim Hecker, has been part of a special breed of performers ever since the release of Haunt Me, Haunt Me Do It Again back in 2001.

While others have struggled to gain their footing in attempting to replicate, Hecker’s intellect and know-how has positioned himself well above his peers as he continues to revolutionize his sound. Chicago-based stalwarts, Kranky, have reissued Hecker’s first two proper full-lengths, showing where Hecker was in his beginning phase and how he helped kickstart a revolution for the genres of ambient and noise music

Just like 2016’s Love Streams, Hecker has always put his writing abilities to work as a musician who regularly asks himself how to achieve a level that is beyond what he has already accomplished. With Haunt Me and his second proper full-length, Radio Amor, Hecker has always appeared to hold himself accountable for that progress. Moments on Haunt Me show his dedication in toying with sound. Reminiscent to GAS’ Pop, “October Pt. 1” is a soft, pulsating track with quiet, trickling static – throughout Haunt Me, Hecker is shown as a master by incorporating various techniques, but all the while letting it mature as one united work. “Boreal Kiss Pt. 1” is rather opposite: a spiritual-sounding track full of glossy blips that sound like refracting light made in a holy place. Hecker boldly shifts his tones – while “Boreal Kiss Pt. 3” is a pleasing change, it’s one that vaguely recalls Boards Of Canada around its 43 second mark: a hazy addition of beat-filled music, which also becomes more prominent towards the track’s midpoint. While Haunt Me shifts around, it’s an album that’s also set to the theme of solitude, but even beyond that, sometimes complete desertion, however, it’s a feeling you’re compelled to take part of. Other moments on Haunt Me have wispy elements – almost communicative parts where it feels like something or someone on the other side is trying to interact with you. Within its twenty songs, Haunt Me’s entirety lasts less than an hour, but in that time, Hecker manages to transform ambient noise itself into something magnificent. At times it’s beautiful and even cleansing while other moments prove to evoke pure dread.

Radio Amor repositions Hecker right away – usually sophomore releases tend towards reiteration, but while there is certainly overlap with Haunt Me, Radio Amor is its own force. It begins light-heartedy, with pulsating bursts of noise and samples, showing Hecker in experimental joy. But Hecker shifts those tones accordingly. The terrifying aggression of “7000 Miles” is as dark as ever…a true ode to Stars of the Lid if there ever was, but Hecker doesn’t stay comfortable for long and his ability to not become attached to a certain sound or process allows his writing to continuously bloom. “Careless Whispers” feels like you’re being submerged under water, going deeper and deeper as your chest tightens, while “Azure Azure” could perfectly set Hecker on stage as an opener for any number of relevant metal acts. While Hecker dabbles heavily with textures throughout Radio Amor, it isn’t a call of desperation for relevancy, it’s his raptness as a music maker – a subtle, however, proteus-like quality that he doesn’t simply have, but rather demands of himself.

To be able to experience Hecker’s progression as an artist over time is a wild experience. From his early days, he plays with sound in such a remarkable way. That evolution is ever-present: Harmony in Ultraviolet, Ravedeath, 1972, and Virgins. I oftentimes find myself casting about different musicians, ones that I want to invade my thoughts. On my end, it’s desperation for something new that will help satisfy my desire. Sometimes it’s a frantic search to find an individual to be that flagbearer, but that discovery is remarkable when one finally locates it. Hecker has managed to be responsible for this type of feeling over his career. Haunt Me and Radio Amor are staples in this field – and it’s a point where you can exhale and check this one off the list until you continue to dig through the dark for the next one. Kranky’s reissues of Hecker’s work are preeminent reminders of a man working within an exceptional wheelhouse as a purveyor of not only transforming but introducing what ambient and noise music was, but also how important it is to still have today.