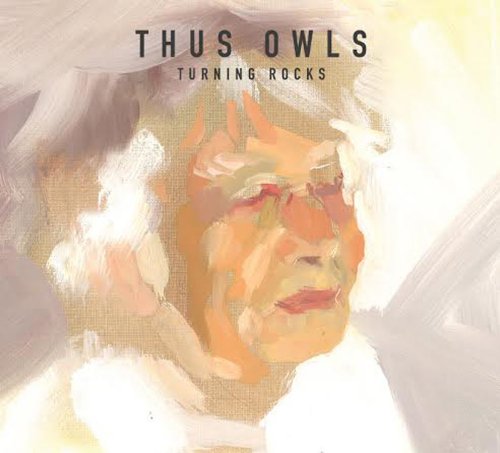 Sweden’s Thus Owls turned heads in 2009 with their debut album Cardiac Malformations, an experimental, jazzy and jagged record that was in stark contrast to the more honeyed hooks of their compatriots. Turning Rocks sounds much more traditional in turn, but it’s all relative, and Thus Owls set out into strange territory to begin with – so does this new offering still stand itself enough apart?

If you’ve been along for the ride then Turning Rocks’ opening salvo is a satisfying alloy; there are hooks and riffs and the usual clash of drums and imaginative instrumentation, and not at the cost of the angular textures that make the quintet such a worthwhile proposition. “Bloody War”, the record’s third of ten tracks, features more of what we might recognise as the ‘characteristic Swedish female pop vocal style’, but underpins it with jazzy percussion and double bass more reminiscent of Cardiac Malformations. By the slow burning, minimalist synths and bass drum of “A Windful of Screams” all signs point pleasingly to Turning Rocks being a more mature album than 2009’s debut and a fuller one than Harbours.

This feeling permeates the album, as do Erkia Angell’s off-kilter vocals, melodic but with a slight rasp. She has a wonderful knack for the less obvious harmony and the technical ability to back it up, sustaining soft, lilting vibrato as easily in “Ropes” as she belts out a heartfelt crescendo on the titular sixth track. Her understated talent combined with the often stark arrangements lend the album a powerfully windswept feel, a rough elegance. Though it might take a while to sink in, and indeed at careless first listen some of the tracks do feel a little underwhelming in their reverb drenched simplicity, there is depth here.

Less experimental than their past offerings, Turning Rocks finds Thus Owls in a slightly more comfortable groove without having lost their edge. It’s very much a mood piece that benefits from a concerted listen, and does peter out a little however. Nevertheless if you’re after that Swedish alt-pop feel with a more varied and less obvious bent than many of their contemporaries, about 40 of the record’s 50 minutes are pretty essential listening. Anyway, it wouldn’t be fitting somehow if it was all too easy.