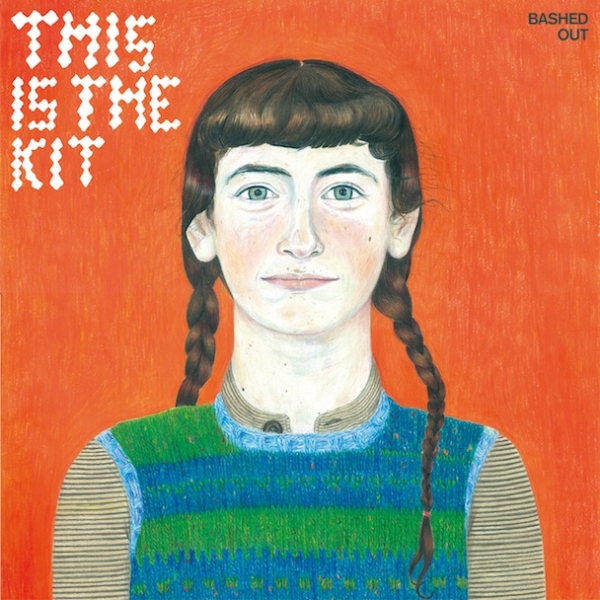 What strikes first – and stays with throughout Bashed Out – is the clarity, precision and vision of This Is The Kit. Not just the voice of Kate Stables, pure and right up in the mix from the first notes of “Misunderstanding”, but the whole band from the liquid guitar lines, the flat thud of the drums and scraping of violin that can be heard on that opening track to the forceful strum and rousing brass of the closing “Cold and Got Colder”.

It’s the purity of folk music, that timeless oral tradition which needed clarity in order to be passed down through generations, which Kate Stables carries on in This Is The Kit – but she’s not someone completely beholden to the past. Her band has evolved, slowly but surely, over a number of years to the point where it would be a pointless compartmentalising exercise to call Bashed Out “folk music”. This new album, recorded with The National’s Aaron Dessner, comes five years after second release Wriggle Out The Restless and it is time well spent: while long-time collaborators Rozi Plain, Jesse Vernon and Jamie Whitby-Coles provide stability, there are also contributions from the likes of Matt Barrick (The Walkmen), Thomas Bartlett of Doveman, and Bryce Dessner which makes Bashed Out feel like a record to stand in the same field as High Violet or Lisbon.

When Stables sings “better get used to dark, get used to wet” on the chugging “Silver John” it’s both a particularly British line but it’s also a line that shares the gnomic quality found in Matt Berninger’s lyrics for The National; as the bass throbs and the brass rises in the outro just above the shimmering electric guitar, it feels like rock music that should be thrilling crowds in large venues, yet so very intimate – like Stables is singing just for us, just to that one person in a crowd of persons. It’s not the only moment on Bashed Out where this feeling settles upon the listener: the slow-dance swoon of the title track, where woodwind meets ponderous and smoky major chords on the verge of feedback, Stables ominously sings “we’ve been getting most mightily filthy / mud marks up to our necks”, hinting at struggling with dark times. It pulls off the trick of being both unsettling and welcoming, pulling you in then hitting you square with a harsh word – something Stables does on “All In Cahoots”, taking aim with lines like “who has been teaching you?” and “neither of us to be trusted, are you? / no-one gets let in both in cahoots / what a duplicitous two”. Matched with music that’s warm but with a spark that might burst into a fireball at any time; it’s powerful stuff.

Even when Stables returns to territory you’d nominally call “folk”, she’s taking it somewhere new, not hamstrung by any thoughts of Arran jumpers, finger-in-the-ear, and eyes closed musicality. Both “Spores All Settling” and “Nits” are singularly English in their approach; the former highlights Stables’ wonderful banjo playing while singing of some kind of cleansing (again with the water, just like The National) but surrounds it with an ocean of sounds that carry it off and upwards rather than drown it. That is of course tribute to Dessner’s brilliant production; at every turn there’s a moment where the listener can savour a melody or an individual instrument while never losing sight of the bigger picture. The swell of brass during the song about that most quintessentially British school infestations (it may not be about that, I’m willing to admit) is stunning, and once the piano waltzes in it becomes a heartbreaker of stadium-sized proportions.

It’s hard to find fault with Bashed Out; timeless and completely modern all at once, Stables might have taken a little bit of time to hit her stride with This Is The Kit but this combination of players has helped her realise a vision of sorts: it’s as lucid a record as you’ll hear all year.