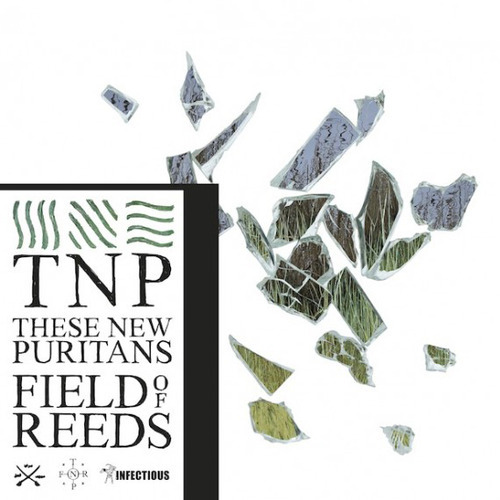 Tagged – with some justice – as “post punk” after the 2008 release of their debut album Beat Pyramid, a release that was of a marked creativity and originality for a pair of twentysomethings, These New Puritans had already made that piece of pigeonholing seem unfairly restrictive by the time of its 2010 follow up Hidden. Now, Field of Reeds succeeds in making even greater leaps – stylistically, in intent, in atmosphere and in sheer musical inventiveness – to such an extent that the band have reached a stage where their output has become beyond any kind of straightforward categorisation, or almost even any simple description.

Jack Barnett, one of the pair of twins (with brother George) who form the core of the band, describes this album, on the press release that accompanies it, in these terms: “The music speaks for itself more than any other we’ve done before. There isn’t much outside of it that informs it and there aren’t any soundbites to tell you what it is.”

Of broadly neo-classical or avant-garde construction, this is not an album that yields very easily to the listener. It’s frequently frustrating, maddeningly opaque for most of its running length, full of jarring moments and sounds that could be described as “ugly” or certainly “graceless”. It’s also a work of quite astonishing complexity, depth and beauty, which might just mark out its creator as a genius.

So the casual listener is likely to take away an impression of Barnett’s deliberately, wilfully untuneful singing (sometimes delivering actual words, sometimes just a selection of peculiar vocalisations), slurred as on ‘Fragment Two’ and ‘The Light In Your Name’, deep and often inaudible, seemingly delivered for the singer’s own edification rather than for an audience.

The complex instrumentation – painstakingly scored and arranged by Barnett, although often sounding as if it has been improvised – again often presents a façade that seems impenetrable. Rhythms, repetitions, melodic patterns and the interplay between voices are all quite simply so far removed from the comforts of straightforward Western commercial rock/pop/indie/whatever musical styles that it sometimes seems that they have been deliberately constructed to exclude – or certainly not to allow for – any easy inclusion.

If you’re a dogged type, though, and persevere, you should at some point find areas of clarity starting to emerge. Fragments of melody begin to resonate: a haunting minor key segment in ‘V (Island Song)’, Portuguese singer Elisa Rodrigues’ vocal section, dramatic and impressive, on ‘Dream’, or the childlike delivery of the opening to ‘Spiral’. The crescendo of melody that closes the album on its title track. The rhythmic piano of ‘Fragment Two’. Snippets of lyric pervade your consciousness – ‘Fragment Two’’s “I swim to attrition”, ‘V (Island)’ with its intriguing dualities “Not the seeker, not the found”, “Not the suspect, not the victim” and “Not the questions, not the answers” or ‘Spiral’’s perhaps revealing/enlightening “I got nothing that I want to say”. These rewards feel hard-won, and as such begin to feel precious.

Frankly, though, I can’t deny that in all probability I would have given up on the album much sooner had I not committed to reviewing it. This is introverted, inward-looking and often quite exclusionary music that can feel, in its listening, like a battle is being waged on the listener by its creators. It’s a battle, though, that’s worth fighting. While it isn’t pretty, cute, comfortable or enlightening music, Field of Reeds is important, resonant, serious and very very clever.