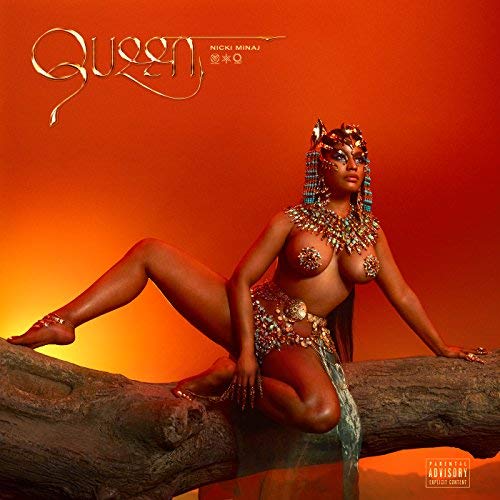 Author Brian Rolli described the album rollout as “reeking of desperation” and her recent collaboration with controversial mumble-rapper Tekashi69 as a “shameless attempt to stay relevant”. While Minaj’s latest album campaign hasn’t been the smoothest ride (and there are certainly less embarrassing things than the "FEFE" video), it’s worth noting that there’s a reason Nicki Minaj can call a record Queen.

Even though 2018’s charts favour a younger model, Nicki Minaj is at the top of her game in every aspect. Technically, lyrically, and melodically, she’s unbeatable, and it’s fair to say she hasn’t been this good since Pink Friday. She knows she’s unbeatable too. At the end of "Chun Swae", she declares “You're in the middle of Queen right now, thinking I see why she called this shit Queen”, following it up with her iconic maniacal laughter.

Of course, the ‘younger model’ in reference is Cardi B, whose futile beef with Minaj is viciously addressed on "Chun Li", the lead track that signalled Nicki’s real comeback. It’s a beef that's acknowledged throughout the record, most notably on "LLC". But Nicki quite literally puts her money where her mouth is – she doesn’t just say she’s irreplaceable, she shows us why – switching up her flow twice while she spits “You thought you'd get my spot? Who the fuck was kiddin' you? Took a lil’ break but I’m back to me / Tryna make a new Nicki with a factory / They’ll never toe to toe on a track with me / There'll never be another one after me / 'Cause the skill levels still a half of me”.

But Cardi B isn’t the only recipient of Nicki’s shots. "Barbie Dreams" could go for the world record of most names dropped in one track. Everyone from Quavo, Drake and Young Thug, to Lil Wayne, Kanye West and Lil Bow Wow gets a mention, over a beat borrowed from Notorious B.I.G.. The most lethal line is directed at DJ Khaled – Nicki asserting “Had to cancel DJ Khaled boy / We ain’t speaking / Ain’t no fat n***a telling me what he ain’t eating” in response to his comments earlier this year about not performing oral sex on his wife. But this track is full of fun too, showcasing some of her wittiest lines since "Stupid Hoe", and snoring on the line “Damn, a bitch snoozin’”.

Instead of concerning herself with streaming success stories, Nicki’s collaborators on Queen are similar to those on her previous records. Young Money big boss Lil Wayne, five-time collaborator and current ruler of pop Ariana Grande, and Eminem, who last appeared on her debut. Add rap legend Foxy Brown, upcoming tour mate Future, and – okay there’s some streaming bait on here – The Weeknd and Rae Sremmurd’s Swae Lee in the mix, and you’ve got the perfect balance of the past and present in hip-hop.

While the record could afford to lose a few of the slower tracks – "Nip Tuck" and "Come See About Me" add unnecessary minutes to an already long LP – they showcase the same softer side (and undeniably great singing voice) Nicki’s displayed on previous records. ‘Majesty’ doesn’t quite have the same energy as "Roman’s Revenge" (Nicki and Eminem’s previous collaboration), and ‘Bed’ could be the weakest of Nicki and Ariana’s pairings, but there’s enough material across the record to convince you Nicki hasn’t lost it.

Queen is Nicki Minaj’s redemption. It’s whip-smart; laying all of her talents out for anyone who doubted her to see. After all, the woman who is the most decorated female rapper in history, has 17 Billboard Hot 100 top 10s, and unquestionably put female rap back on the map, was never going to go down without a fight.