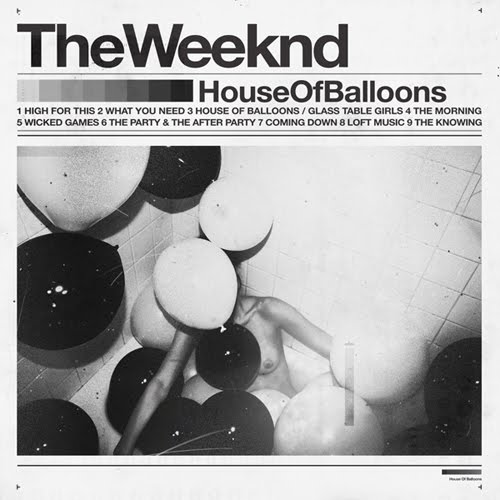 Three weeks ago I received a post on Facebook with the caption “Listen to this, I swear it will change your life.” Admittedly, the sheer hyperbole prevented my stubborn self from lending my ears to another wannabe championed and compared to luminaries such as Drake and The-Dream (not forgetting the birthday intercourse fiend Jeremiah). The adherence of recent artists to relative upcomers has an overriding sense of lethal foreboding, in shadows that have barely reached longevity like the late and unsung Static Major.

Yet, 20 year old Abel Tesfaye aka The Weeknd is a withdrawn figure amidst the buzz (another trend of practice on the web). Following a posse of YouTube clips and steady unravelling of the man behind the music on Twitter, the Toronto native relinquished the proverbial monkey off his back via debut mixtape House Of Balloons a few weeks ago. Alongside producers Doc Mckinney and Illangelo, House Of Balloons is an appealing assortment which juxtaposes Tesfaye’s mounting falsetto and bars of the introspective through R&B, Lo-Fi and Trip-Hop sensibilities.

These influences and the DIY aesthetic may seem an ominous harbinger to steer clear from the hipster’s IT genre of the moment. However, music is an entity that transcends labels with a common ground via the sedate debauchery from Friday to Sunday. The mixtape cements itself in a hollow place on ‘High For This’, as compere Tesfaye declares “You don’t know what’s in store/ But you know what you’re here for”. Soundscapes of an unworldly disposition in tandem with elevating chainsaw rumbles signal a lax proximity which ambles closer to the inner hedonist. The late Aaliyah’s silky soprano hatches from it’s muffled launchpad into a relentless shuffle grooved couplet on the brooding bass heavy ‘What You Need’.

Title track ‘House of Balloons – Glass Table Girls’ is a two-part affair devoted to 80s reverb; mounting crescendo and dynamic synths akin to Mr West’s Flashing Lights in the early section (which stirs around a jangly hook borrowed from Siouxsie And The Banshees). The latter half switches into driving, languorous terrain where The Weeknd spits candidly about coke. Warped pads; the 808 and hazy slow bounce on the impressible slowjam ‘The Morning’ are tempered by “Codeine Cups paint a picture/so vivid” (subtle signal to the “purple drank” penchant of the rap diaspora) which sway adjacently to the missing memoirs that shape this nebulous ambience.

The sluggish percussive backbeat and twang laden drones form the roots on ‘Wicked Games’ which offers a sexually sincere soul ballad on the nine track effort. ‘The Party and After Party’ and ‘Loft Music’ interpolate crisp atmospheric dreampop from Beach House, and is akin to the mutual omnipresent esteem indie and the urban underground have developed. (Drake’s So Far Gone has parallels with Peter Bjorn John and Lykke Li sampled on the mixtape) The former is another floating two-part instalment which shifts from flickering arpeggiated? bells and smooth claps to acoustic slow simmer of baby-making country a la Ginuwine. The latter is initially absorbed by a punchy drumbeat and sonic synths, yet it remains at the morose end of the spectrum rather than salacious.

Minimal austerity is engaging and even more so when we search for an audio antithesis to the suffocation of the artificial. The Weeknd offers an inviting reminder that dark matters are engaging and synonymous with a swagger that draws on peers of yesteryear as well as the present. A full length (and probably uplifting) LP is keenly anticipated.

House Of Balloons is available for free download via the-weeknd.com