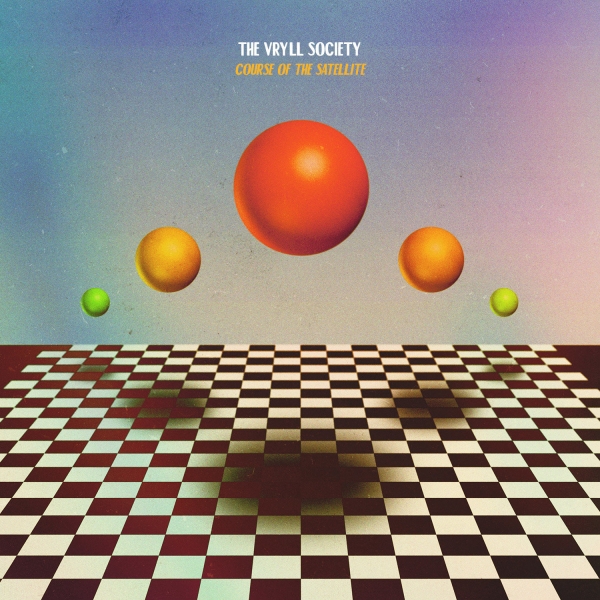 The Vryll Society have constructed a solid sound and built up a loyal fan-base over years of hard work and amazing touring opportunities.

Frontman Mike Ellis says that this strong work ethic was instilled in them by the late Deltasonic founder Alan Wills, who discovered The Coral and mentored The Zutons: “Alan taught us that all you need to conquer the world is a rehearsal room, your instruments, a good work ethic and a positive attitude and you’ll get there”.

This positivity tinged with sadness encapsulates the album. It’s confident and loud, but the lyrics are full of vulnerability. Their psychedelic sound is constantly surprising – throughout the album, hints of pop, rock and trap-hop all crop up at some point, often in the anthemic choruses. The mix of genres, and the fact that the band are clearly not getting hung up on defining themselves, makes Course Of The Satellite really accessible – everyone could find something they like somewhere in the 11 songs.

The album was produced over several months at the renowned Parr Street Studios in Liverpool where bands like Elbow, The Verve, Pulp and more have previously recorded. The Liverpool five-piece let the album form organically and in doing so have released a sharp, shimmering and versatile album. It’s easy to see the effort they’ve put in to stand out from similar bands on the Liverpool scene, particular effort from Ellis’s vocal range, textured and exciting guitar riffs and loops, and some infectious drums by Benjamin Robinson (which really stand out on title track).

Of course, there’s a clear Tame Impala parallel to draw here. It’s easy to see The Vryll Society in the same way we’d see Tame Impala – headlining an indie-rock festival at the end of summer, with a maze of kaleidoscopic lights and thousands of people vibing in the audience – and this is no bad thing. Unlike Tame Impala though, The Vryll Society’s stand-out songs are their shorter and more stylised ones. “Tears We Cry” features guitar scales that give the song an old-timey, relaxed vibe, perfectly encapsulating The Vryll Society’s ability to mix the old and the current together.

The spacey sound on every track could lead one to believe that the album could just be used as blurry background music – but while listening to it, certain lyrics or synths will grab your attention back. “Give In To Me” is nothing short of a beautiful closer. The message it leaves the listener with is this – keep listening, and The Vryll Society will give you even more.