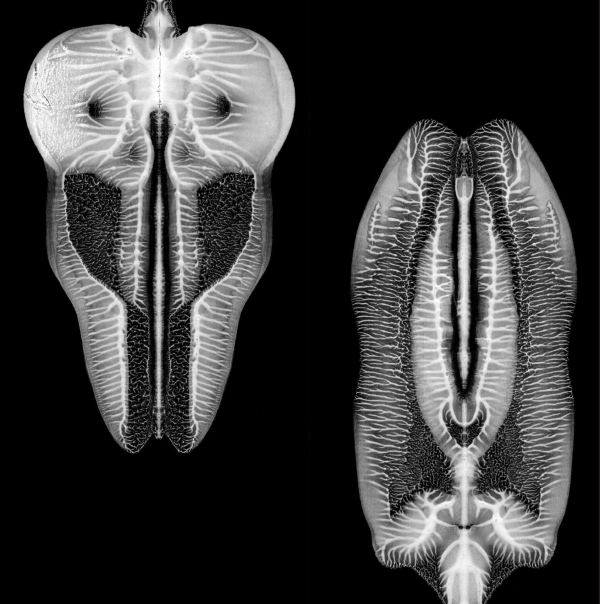 Thrill Jockey refers to The Skull Defekts as ‘the backbone the Swedish experimental underground’. Never have truer words been spoken: this is their sixth album in seven years, and this is the second of those to have found its way out into the world via that esteemed label. A year after they first entered the studio to start recording, Dances in Dreams of the Known and Unknown has finally dropped – and boy, was the wait worth it. It’s no mean feat to top their previous records, but this one just about does it.

Of course, their previous record with ex-Lungfish shaman Daniel Higgs, Peer Amid, was exceptional. It was a refreshing blast of scabrous noise where all of the component musical elements were allowed to grind their own distinctive furrows with endless, discerning repetition.

The album opens in disorienting fashion with “Pattern of Thoughts”. An industrial sturm and drang Faust-ian clatter is constructed around a rubbery motorik rhythm, where Henrik Rylander’s metronomic groove motors the track forward. Joachim Nordwall and Daniel Fagerstroem provide squalling, overdriven guitar scrapes and bristling, razor-sharp melodies in the midst of it all. As is their wont, a rolling drum figure becomes the bedrock for “It Started With the Light”, and a crackling, electric-burn riff burns beneath Higgs’ breathy groaning. The track pushes and shoves forwards, reeling with a deranged intensity.

“The Fable” evokes the hairier end of Josh Homme’s work – both Kyuss’ pulsing desert rhythms and Queens Of The Stone Age’s serrated psychedelia. “King of Misinformation” has a gloomy sense of gothic majesty – the undulating serpentine bass and violent white-noise evokes Grinderman at their most ominous.

The sparse, ticking aural environment of “Awaking Dream” leads into the “The Known Unknown”, which is the densest edifice on the record: You’ll find a ferocious guitar attack, martial drumming and Higgs’ seductive baritone combining to make a fluid polyrhythmic racket.

The relentless rattling percussion that drives “Venom” is supplied by John-Louis Huhta, who shines at various points across the record. The melodic embellishments are made up of a skeletal raga-informed guitar lead and breathless vocals. The track is drenched in feedback, and the periodic interjections of serrated riffs are the only things that break the meditative tone of the track.

The feedback reaches fever pitch on “Little Treasure”, where the guitar tone becomes positively caustic. The guitars are often the focal point in noise-rock bands, and here it’s worth pointing out that The Skull Defekts’ selection and implementation of varied tones on this particular record is fantastic. They switch between blunt-force and razor-sharp atmospheres with aplomb, often within the confines of the same track.

“Cyborganization” closes the record – it unfolds over six and nearly-another minutes, and it fully tests the level of comfort the listener needs from a track for it to be bearable. The sense of impending doom that is cultivated as the track develops is a stark testament to Skull Defekts’ hypnotic power.

The Skull Defekts are quickly becoming one of the most reliable acts in noise-rock, because they’ve always seemed to – consciously or otherwise – better themselves with each release. The fact that they this is the second time they have capitalised on, and built around having Higgs on board is testament to their inclination towards experimentation and their dedication to staying vital.

The main appeal of Skull Defekts – much like their sonic ancestors Sonic Youth, The Fall and Faust – is that their music offers a potent mix of corporal and cerebral thrills (see also: The Icarus Line’s Slave Vows). Like all bastard offspring of gaunt post-punk, searing No Wave and kaleidoscopic krautrock, their records seem vibrant in a coke-sick, zombie-lurch fashion. This sense of nauseating vibrancy is the hook that drags listeners towards this kind of record, where they are scorched with caustic tones and haunted with gallows-humour inflections all in the name of catharsis.

This band are masters of their craft, and Dances in Dreams of the Known and Unknown is simply more evidence to attest to that assertion. Taking objectivity out of the equation, it’s one of the best records I’ve heard this year.