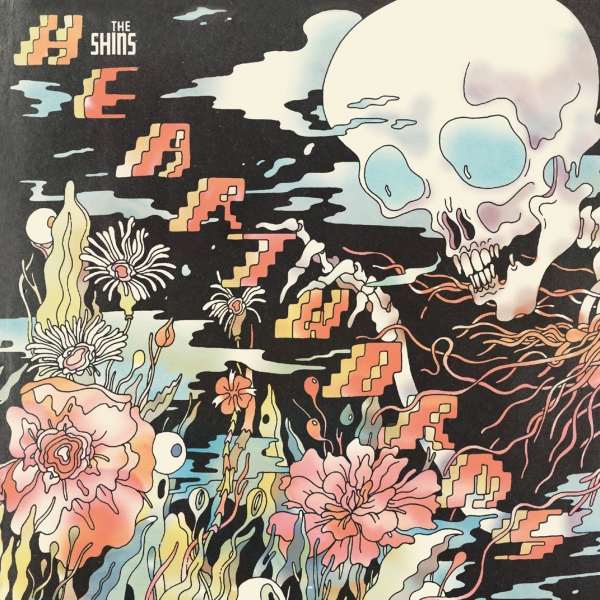 On The Shins’ fifth studio album, frontman James Mercer considers matters of time and perspective in a manner that adds some eclectic oddity to their usual sound. It’s a revitalised style that takes a little time to tune into, but once the electronic wavelength is established, it’s solidly business as usual.

Mercer is a poetic lyricist and his abstractedness continues on Heartworms. With all the extra bells and whistles on this record however, it takes extra attention to appreciate the details. Heartworms is a bit like stepping into an ‘80s fairground. The lights and music swirl and you feel like someone is playing Super Mario or Space Invaders in the nearby arcade. For all its apparent eddying flamboyance, every note is there for a reason and the overwhelming kaleidoscope is clearly very closely designed. It has a Beatles-y headiness with strange instruments and interesting harmonies. The opening of “The Fear” even sounds a bit “Imagine”, with Mercer channelling Lennon. On this contemplative and philosophical track, you can imagine why.

“Painting a Hole” is a Tantalus-type exercise in a kind of futility echoed throughout the album with gnomic phrases such as “painting a hole / but it keeps fading away”. On “So Now What” (a statement, not a question) he does ask the question “guess we just begin again?” which makes life seem pointless when you put it like that. The tone is celebratory though, as “Half a Million” functions as a kind of reverse bucket list where all the stupid things in life are set up against all the things you are ‘meant to be doing’ under a sense of social pressure. Even the cheery “Cherry Hearts”, about love and a “once” taken drunken kiss, centres on the subsequent melancholy acceptance that it wasn’t going to work. It’s a beautifully contradictory song, opposing the upbeat music with his confessional sadness. In the same vein, “Heartworms” asks “what can I do?” in a comparable situation with a more boyish hopefulness, despite the friend-zoning he has received. In a series of poignant little memories showing his worship, it ends “you’re the saddest dream that ever came true”.

It’s hard to tell how autobiographical these songs are, as they also are based on ideas rather than specifics. However, “Mildenhall” is a more personal story. It talks about growing up in the UK, but has Mercer also pine “goddam, I miss the USA” and talk of music was a connection that seemed to ease the difficulty, also recollecting how “I started messing with my dad’s guitar... and that’s how we get to where we are now”.

Mercer’s voice and turns of phrase full of paradox make this an intricate album. It won’t go down as their most memorable when they hang up the guitars, despite the catchy “Name For You” and “Cherry Hearts”. “Dead Or Alive” nestles in the midst as a hark back to a more conventional The Shins sound. Another contrast among all the others.