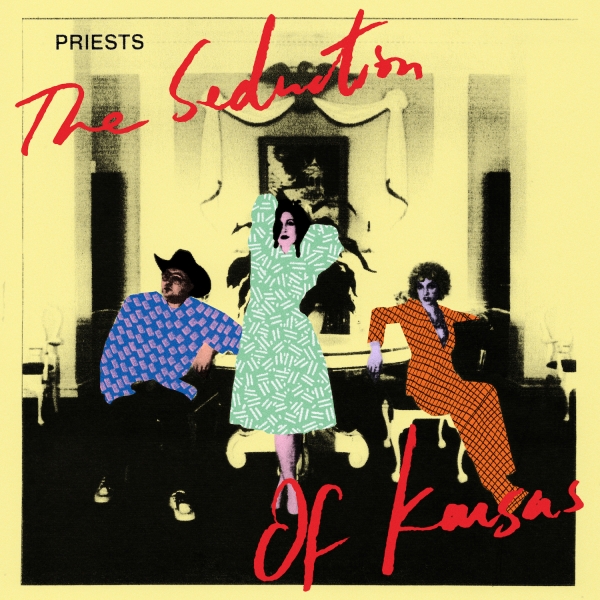 In his 2004 book What’s The Matter With Kansas?, American journalist and historian Thomas Frank explored the notion that, throughout history, Kansas has often been one of the first states to succumb to populism, and has acted as a sign of greater political change throughout the nation.

On new album The Seduction Of Kansas, DC punks Priests have provided us with an updated examination of this theory and ask us important questions about the place we find ourselves in 2019.

Priests are arguably one of the hardest working punk bands today - on top of rigorous touring and recording, they run their own record label Sister Polygon, through which they release their own material, as well as projects from the likes of Snail Mail and Downtown Boys.

In the two years since their furious and acclaimed debut album, Nothing Feels Natural, Priests have expanded their horizons. Where their debut was concise and focused, their latest record is expansive and more diverse, exploring a whole host punk’s different avenues across its 12 tracks. We hear chaotic noise rock on opening track "Jesus Son", Yeah Yeah Yeahs-tinged dance-punk on its title track and have a healthy dose of slick post-punk on tracks like "I’m Clean" and closing number "Texas Instruments".

As the album progresses, it switches almost at random between this wide range of sounds. Slow, atmospheric number "Not Perceived" has a Cure-recalling '80s post-punk inflection, and sees the whole band at their most melodic; yet it is followed up by the almost polar opposite "Control Freak" - a brutal cut, driven by a thundering drum beat with deranged basslines and discordant guitars from GL Jaguar.

Jaguar has a sound firmly of his own. He borrows sounds from across the punk spectrum and gives them his trademark surf rock twist to create swirling, abrasive and disorientating guitar sounds, while lead singer Katie Alice Greer showcases lyrical prowess and a broad range of vocal styles. Throughout the record, she demonstrates everything from guttural yelling and frantic shrieking to a classic deadpan Kim Gordon-style delivery and even spoken word on the mesmerising interlude track "I Dream This Dream In Which My Body Is My Own".

Standout tracks include "Jesus Son", with lyrics that sound like they could have been lifted straight from the pages of Kurt Cobain’s notebook, and lead single and title track "The Seduction Of Kansas" - a cut built on drummer Daniele Daniele’s dance-informed beat that sees Priests showcasing some of their catchiest hooks to date.

At times, The Seduction Of Kansas can struggle to flow from track to track as a result of the sheer diversity of styles it encompasses, yet while this record might not be as tight and focused as their debut, it is certainly more ambitious. The Seduction Of Kansas is an intelligent and essential record the establishes Priests as masters of their craft, and truly marks them out as one of the most capable punk bands around.