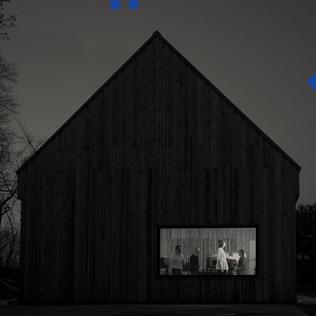 In a recent interview with Stereogum, The National’s frontman, Matt Berninger, made a remark that functions as a useful entry point into their new album, Sleep Well Beast: “The world isn’t fun. But you can still write a fun song… about war and family and the things that matter. It’s painful… but at the end of it, you feel enlightened.”

This dichotomy, between misery and catharsis, has long been at the heart of this band’s work, arguably the strongest of the currents which ripple and tug throughout each National record. Yet never before has it been foregrounded quite so brazenly as it is here; although Sleep Well Beast is hardly The National’s most physical, visceral record – indeed, it may perhaps be their most restrained in such respects – much of this album can be read as an exercise in confronting personal and societal darknesses and transposing them into work which, if not exactly effervescent with hope, at least manages to transcend mere navel-gazing and push off into clearer, more open waters.

As with every National album, there’s a political aspect to Sleep Well Beast which must not be ignored. However, its salience could be easily overstated; it would not be unreasonable to approach this album with the preconception that these outspoken Democrats might pepper it with explicit attacks upon the current American administration, but that’s not quite what’s happening here. Instead, the album’s political dimension is delivered in a more ambient manner, addressed via allusion and atmosphere rather than direct rhetoric. There’s no better example of this than the album’s lead single, “The System Only Dreams In Total Darkness”, which in its title alone evokes the portentous skies under which the record was written. The song itself is terrific, driven as so many National tracks are by Bryan Devendorf’s industrious, instantly recognisable percussion – is there a more expressive, accomplished drummer in mainstream popular music working today? – and climaxing with an unexpectedly gratuitous guitar solo (there’s that juxtaposition of the fun and the miserable rearing its head once more). But it’s the lyrics, which build upon that title, which have the longest-lasting effects on the listener. From the ostensible resignation of “We’re in a different kind of thing now… I thought that this would all work out after a while”, to the howled pleas for understanding that constitute the chorus (“I can’t explain it any other way!”), Berninger manages to express the dizzy range of emotion that is a by-product of any attempt to locate meaning and forge relationships under increasingly oppressive social circumstances without ever naming either the feelings or the circumstances outright.

Elsewhere, Sleep Well Beast is generally more sedate in its pacing, save for the coruscating “Turtleneck” (which features Berninger’s most desperate, throat-shredding vocal performance since the days of “Abel”, “Mr November” et al) and the peppy “Day I Die”, a boisterous romp of a track in the mould of “Sea of Love” or “Conversation 16”. To these ears, this overall gentleness is, if not a failing of the record, certainly a little disappointing. The National have always been at their most potent in those moments when their intricacies and eccentricities are allowed to interact, to clang and scrape into misshapen yet relatable constructions, which sound like the anxieties and fears that are so eloquently described in Berninger’s writing. Take “Lemonworld”, from 2010’s High Violet; on that song, Devendorf’s drums flutter and fidget like a nervous heart as the dirgey, dirty layers of guitars perfectly capture the mundanity and guilt of the class-anxious urban living upon which Berninger sets his lyrical focus. It’s not that Sleep Well Beast is totally bereft of those moments – the closing title track, for example, situates Berninger’s intonations of love, loss and self-worth within a collage of timbres which beautifully articulate the niggling doubts and cyclical internal arguments that so often accompany the kinds of ruminations about self-identification to which the singer is alluding throughout the track. It’s just that those sweet spots are a tad further apart than on other National albums, the space between them occupied by tracks like “Guilty Party” or “Carin At The Liquor Store”, which, though pleasant enough, feel like the kind of songs that this band could knock out more or less to order. Of course, any research into the group’s notoriously lengthy, arduous compositional process will inform you that this will have categorically not been the case, but tracks like these do just sound a little too formulaic, too easy, for a band as articulate and inventive as this.

Yet as comparatively bland as those tracks are, they're still worthy of proper consideration, and they lead me back to that central transaction with which I began. Rarely have The National sounded so comfortable – “fun” is the wrong word, but there’s an ease and a brightness here that has generally been absent on previous albums – and yet one comes away from Sleep Well Beast with a feeling that it is one of their most (legitimately) fearful, anxious LPs yet. It’s as if they’ve never been more comfortable in their own skin and less comfortable in their own country.

This isn’t The National’s finest album – for my money, that’s still High Violet, or if I’m feeling fruity, Alligator – but there’s much to cherish on Sleep Well Beast. And it really matters that a band as capable of thoughtful, intimate commentary (both personal and political) are as big as The National are now. They hardly straddle political significance and A-list ubiquity in the manner of, say, the good sisters Knowles, but theirs is an incredibly valuable contribution to that grey area between solipsism and societal concern that popular music is so uniquely capable of accessing.