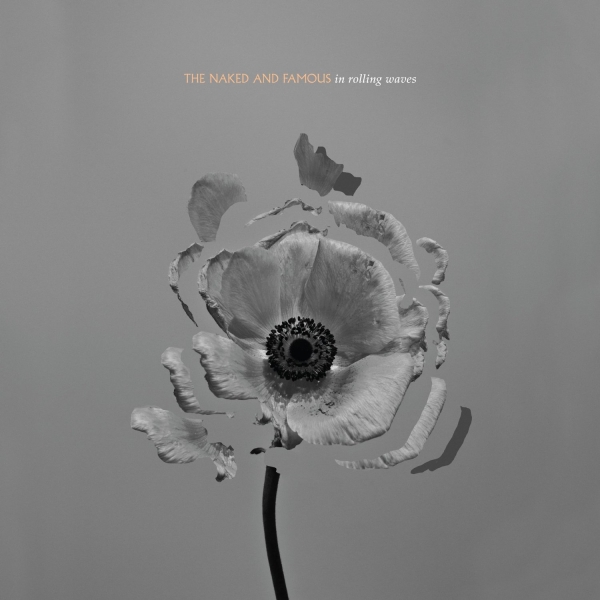 The 2010 release of The Naked and Famous’ debut Passive Me, Aggressive You was accompanied by the relentless playing of ‘Young Blood’ on Gossip Girl and in Topshop stores up and down the country. It was a record that, if lungs made music, often sounded like it was hyperventilating as an adrenalin fuelled and often energetically unbridled melodic bomb. But after three years away, the breaths have slowed and developed a meditative openness as the Auckland quintet return with their second album, In Rolling Waves.

Throbbing synths dissolve into acoustic strums as ‘A Stillness’ opens with the dynamic setting of a blossoming new beginning. Whereas tracks on Passive Me, Aggressive You were layered indefinitely with scuzzy synths and gritty guitars, ‘A Stillness’ approaches the frontiers of methodical, well-defined sounds, only to logically spin them out of control again. The opening acoustics build with a gradual intent towards the band’s trademark electro-explosions – only this time, you know how you got there, and enjoyed every part of the journey.

‘Hearts Like Ours’ sees the return of Alisa Xayalith’s plaintive vocal range as sharp choruses merge into softer, echoed hums. It shoots itself far out into the cosmos and flings itself into an orbit around a tantalizing world of electro-rock. Elsewhere, the expertly layered ‘Waltz’ is like a triangle divided into hundreds of other triangles. Shuddering synths are shrouded by pattering drum machines, hauntingly wordless vocal echoes float over a murmuring of bass lines. Like the dance itself, you are carried through each movement, one segment at a time, until you spin around in a heaving but soothing mix of melodies thawed by the harmonic duet between Thom Powers and Xayalith.

‘Rolling Waves’ takes Xayalith’s slow, elegiac vocals and tears them apart with insistent, unflinching guitar chords – only to slacken intensity with a distant piano melody. Like waves themselves, it ebbs and flows a sense of calm despite the raging power beneath. Meanwhile, Powers and Xayalith engage in an achingly candid narrative on ‘The Mess’, pleading, “it’s a hell of a long way to fall just to learn to get up”. Guitars swell, synths drone, and hearts throb as attempts at suppression fail and end in an overwhelming release.

‘Grow Old’ lets the heart rates calm down and the fists relax, as Powers’ muted vocals give in to a slower, soothing lament with a reserved sense of acceptance – “I wasn’t supposed to feel ashamed” – whilst ‘What We Want’ is an strikingly harmonised sunken dream of twinkling pianos and blissful melodies.

‘A Small Reunion’ closes the album, breaking out the acoustic guitar and violins as Powers and Xayalith’s vocals effortlessly and flawlessly melt into a tender nostalgia and poignant possibilities – “we could say we didn’t mean it / we could dig up all the names / we could brag about our future / talk about our leaving day / we could have a small reunion / for all the people that we knew / we’ll all get drunk and celebrate / here’s to me and here’s to you”. But of course, it wouldn’t be a TNAF record without a rousing, climactic ending – violins ride the waves of oscillating guitars and clanging drums, only for it all to come crashing down leaving only a wistful echo.

In Rolling Waves is a weightless collection of diverse possibilities that convey the spirit of life through songs that breathe with fresh but experienced lungs. It’s a glorious return from one of 2010s most talked about bands that deserve to be talked about all over again.