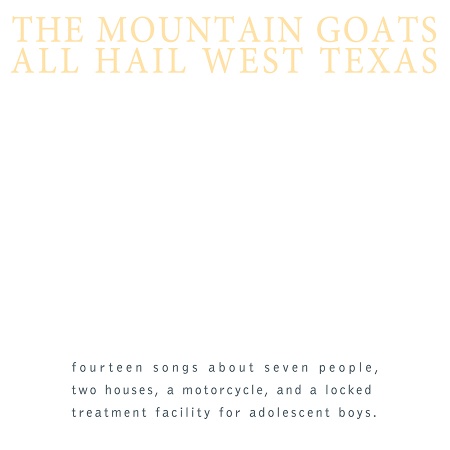 It’s a sticky Saturday morning and, like a kid watching cartoons, I’ve been awake since before 7am. Unlike a kid, I’ve got my second cup of coffee in my hand (with three ice cubes in – very important), and I’m trying to figure out what there is left to say about The Mountain Goats’ All Hail West Texas. Well, for starters, the remastering here is negligible – its rough edges and harsh sonics were always part of its charm. But for some reason, it’s been out of print for years, and never available on vinyl… until now. So let’s get that out of the way now: all hail Merge Records!

AHWT was the last self-recorded Mountain Goats album. It came out in 2002 (so no anniversary marker here, unless John Darnielle has a thing about the number eleven), but was followed months afterwards by Tallahassee, Darnielle’s first foray into fully-fledged studio craft. Yet All Hail West Texas is the greatest thing released under the Mountain Goats banner; yes, I think that Guided By Voices are the best band to ever walk the face of the earth, but that doesn’t mean I’m a strictly-lo-fi kind of guy. The thing about West Texas is that it’s simply a flawless collection of songs, with a spirit that Darnielle has never quite recaptured. That’s not to say his later works have been shoddy either – the man is a machine, and Heretic Pride, We Shall All Be Healed and Transcendental Youth all more than stand their ground in his catalogue – but this, quite simply, is the jewel in the band’s crown, the coalescence of all the myths and legends of Darnielle’s writing to date.

There’s simply not a wasted second on the record; all fourteen songs are simple and direct, immediately recorded in inglorious mono with nothing - save the cheap Casio autochord presets on ‘Blues in Dallas’ - but voice, guitar and the album’s secret third instrument – the insistent hum of an increasingly-broken boombox. And Darnielle’s lyrics come together in a way they never had before – the single line which busts ‘Source Decay’ as wide open as my mental image of the southern deserts of America -”I wish the West Texas highway was a Moebius strip” – or the way he twists the Notorious B.I.G.-quoting tale of the ‘Fall of the High School Running Back’ from comedy to tragedy in just ten seconds:

“Selling acid was a bad idea, and selling it to a cop was a worse one.
And the new law said that seventeen year olds could do federal time.
You were the first one.”

The ‘Alpha couple’ who come to the forefront of Tallahassee make a few appearances at All Hail‘s tragic core too; ‘Pink and Blue”s heartfelt ode to a newborn baby – “true gold, nine days old” – glides into ‘Riches and Wonders’, where the pair are at the peak of their happiness, but ever teetering on the brink (why else would their love “gorge on the alcohol we feed it”?) before the awkward descent into ‘The Mess Inside’. In the wrong hands, it could have been a stadium rock anthem, but with just Darnielle and his acoustic guitar, every line is wrung with an actor’s attention to detail, hinging on its desperate end to every verse – “I wanted you to love me like you used to do.”

The main draw of this reissue for hardened Mountain Goats fans, an obsessive breed at the best of times, are Darnielle’s new liner notes and a selection of seven bonus tracks from the same era. Darnielle infamously destroys all tapes of any songs that don’t make it to his albums, so this is a veritable treasure trove – save perhaps the alternate take of ‘Jenny’, which belies Darnielle’s status as a one-take wonder status as he tentatively figures out how to actually play the thing. None of the tracks quite sound like they’d have fit on the album proper, but it still makes for a rare insight into Darnielle’s creative process – knowing quite what got weeded out of the finished product – especially since there doesn’t look to be any sign of a Mountain Goats box set anytime soon. The stately ‘Answering the Phone’ attempts to reconcile the mistakes of its narrator’s past (“Maybe I listened to that first Black Sabbath album – the one with the witch on the front – one time too many…”) and his present, only able to weakly surmise “I think something’s wrong with me.” Meanwhile, ‘Tape Travel Is Lonely’ practically swaggers with the nervous energy of someone who’s had a few drinks too many, and contains some of the most vividly dark lyrics Darnielle has ever sung. “Mosquitos suck the blood out of my body,” he screams, “Why don’t they finish the job?” Unfortunately, as the best bonus cut here, its status as an outtake is assured by the sudden sound of a tape coming to a stop – we’ll never know quite how the song really ends.

So the coffee’s long gone and the tiredness is rising again. I’m going to go about my day like a normal person in a rapidly-cooling Northern city. Yet I’ll be spending all day dreaming of inhabiting this album, befriending its seven people, hanging out in two houses, careering on a motorcycle, and even locked in a treatment facility for adolescent boys. To give Darnielle the final words, I wish All Hail West Texas was a Moebius strip. I could ride it out forever.