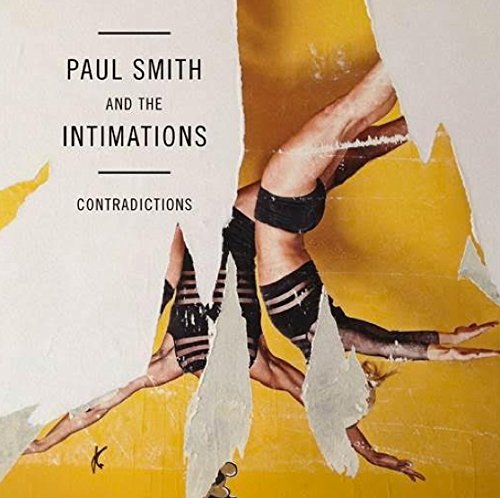 Paul Smith had a busy 2014. Not only did his band Maxïmo Park release their fifth studio album, he was also engrossed in a number of side projects including a collaboration with Field Music’s Peter Brewis, the duo concocting a mixture of avant-garde and contemporary pop arrangements that went under the banner of Frozen By Sight.

It’s now late Summer 2015 and the hard-grafting Middlesbrough man has popped up again with his second solo LP, Contradictions, and it’s clear that he hasn’t lost any of his Northern charm that made him such an iconic songwriter back in the early Maxïmo days.

The proudest of gents, Smith has always been true to himself and has almost made it his upmost agenda to cling to his Northern roots within his songwriting. Unlike the bandwagon of bands and artists that feel the pressure of relocating to London for the sake of artistic integrity, Maxïmo Park decided to stay close to home and capture the true beauty that inspired them to write such reflective tracks as "The Coast Is Always Changing", "By The Monument" and most obviously "Middlesbrough Man"; a happy accident that was spawned when the band were attempting to cover The Fall's "Edinburgh Man" for the deluxe edition of their latest LP, Too Much Information.

Though his band hasn't received the critical acclaim that it once did circa 2005 with earlier releases A Certain Trigger (2005) and Our Earthly Pleasures (2007), this hasn't stopped Paul in the slightest from indulging in numerous projects, releasing new material on a regular basis and collaborating with various artists in and around the North-East. Following the release of his debut solo LP, Margins (2010), that again struggled to hit the mark that everyone was expecting, in true working class fashion, Paul threw his efforts back into his music; undeterred by the outside world's opinion.

Another group that also chose to avoid the obvious migration to the South, Field Music (David and Peter Brewis respectively) are close friends of Maxïmo Park. While helping the band produce their fifth LP, David Brewis began writing new, challenging material with Paul. The duo eventually brought us the LP Frozen By Sight (2014). This was the first time we really heard Paul Smith, as a solo artist, step out of a comfort zone that he had obviously been cocooned in with his band. The orchestration is spectacular on Frozen By Sight, with rich, harmonious and colourful melodies that still remain dissonant and jarring. Paul's lyrics are fantastically poetic, a collection of poems and sonnets that he wrote on his travels around the world. It was clear that he had taken a new direction with his songwriting and was doing so with some ease.

This leads us nicely, then, to the point that we have arrived at, with the release of Contradictions (2015). It can be said that Paul hasn't completely shook the shackles loose from his musical past, the instrumentation provided by his backing band The Intimations being fairly similar to that of Maxïmo Park's on a number of tracks ("Before The Perspiration Falls" or "The Deep End"), with typical rock/ pop song structures that are heavily guitar laden accompanied by sharp grooves from the interlocking rhythm section.

There are, however, many strong moments here. Stand out tracks include the single "Break Me Down" (an absolute belter of a pop song), "I Should Never Know" and "Coney Island (4th of July)", which references some of the greats - The Smiths, Duran Duran and The Cure - with distinct 80's-styleguitar effects and bold beats that take us back to the days of the porno tache. Most impressive, though, is Paul's songwriting. As with Frozen By Sight, he has used these songs to express his feelings on the world and places he has seen and visited; not just the North-East. Speaking of his feelings on Coney Island, he said, "I was quite sceptical about the place. The idea of glamour and squalor sitting alongside each other appealed to me and I tried to create something equally uplifting and wistful."

After several years of ups and downs, it's great to see Paul Smith is still writing great music. When a track of his is played, one instantly recognises that smoggy twang that has made him such a Northern icon. Where the latter Maxïmo Park albums lacked the songs and momentum that fans were looking for, and his debut suffered slightly, Contradictions is certainly a step in the right direction and sees Paul on the rise once again. This album is a dark horse, a grower, and one that current fans and newcomers to his music will appreciate alike.