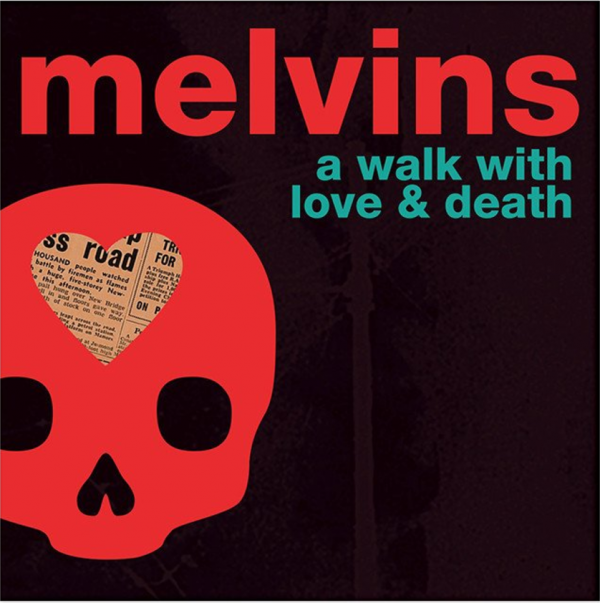 With last year’s Basses Loaded masterfully traversing weighty experimentalism, jazz fusion and country rock, as well as their well-established meld of smothering doom and supreme stoner rock, The Melvins have always been a band resistant to second-guessing.

Their first ever double-album – a remarkable fact in itself considering the sheer scope of their output to date – A Walk With Love and Death is as perfectly polarising as their expectation-thwarting, four-decade discography en masse. Self-produced alongside engineer Toshi Kosai, the release boldly unites two disparate realms: Death, a nine-song, de facto studio record, and Love, a thirteen-track ambient noise headtrip that doubles up as the soundtrack to the forthcoming Jesse Nieminen-directed short film that shares the title of this release. With frontman Buzz Osborne having said “the album, the soundtrack and the film are benchmarks for us”, combined, it’s a trifecta the musical side of which is as accomplished as it is brilliantly at odds with itself.

As well as spearheading it in most explicit form, The Melvins have always ensured their own brand of heavy transcends the merely scuzzed-out and sludge-sodden. Side One in Death is real testament to this. With “Flaming Creature” and opener “Black Heath” conjuring subtler reverberations of the finest riffed patterns and locked grooves from the likes of their seminal fifth album Houdini and 1994’s Bullhead, syncopated prog forays and poppier hooks ensure the likes of smothering flameout “Cardboa Negro” and the prototypical Melvinsism of “Edgar The Elephant” temper subtle weight with brazen spirit. And yet, with King Buzzo in emphatic form throughout, moodily incanting on the likes of slow-burning ‘Sober-dellic’, peaks including "Flaming Creature" and early highlight "Euthanasia" equally reveal the fist-clenched, stoner doom quintessence that sets them apart from their peers, reminding one that the Melvins’ heyday is but one rolling present utterly insubordinate of past victories.

As much a bonus disc as it as a companion of sorts, Love is a diametrically opposed sonic proposition from the outset. Serving as score to the Melvins-produced, Jesse Nieminen-directed short film of the same name, it packs a wilfully challenging forty-odd minutes, marrying demented noise and disembodied melodies with opaque field recordings and a tripped-out tapestry of mildly unnerving found sound. From opener "Aim High" to the free-form wordplay and clattering ambient of "The Hidden Joice", it’s a perfectly psychotic afterbirth redolent of a golden age of weirdo cut-up sound collages. On the look-out for a new means to shift hangers-on at the tail-end of a house party? Look no further than this dense and disquieting masterclass.

Even for a band who have subverted expectation and sidetracked any semblance of clear-cut conceptual continuity with all but gleeful ease over 37 years and myriad releases, A Walk With Love and Death re-frames the Melvins’ legacy with newfound aplomb. Whilst perhaps unlikely to win over anyone sitting on the fence up until now (unless, of course, brief appearances by The Pixies’ Joey Santiago, Le Butcherettes’ Teri Gender Bender and That Dog’s Anna Waronker here make all the difference) this is not merely their most impressively realised effort in many a moon, but also one of the most rewarding listens of the year thus far.